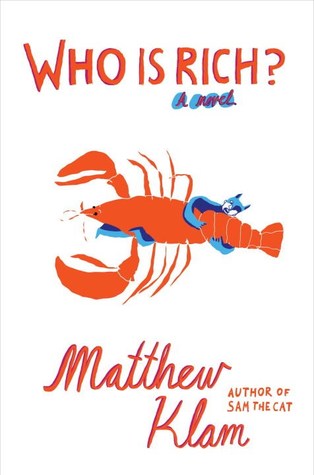 Title: Who Is Rich

Where you can find Who Is Rich: Amazon

Every year, Rich Fischer leaves his family behind to teach a class on cartooning at an annual week-long summer arts conference. Amy O’Donnell is a student in narrative painting, the mother of three, married to a brutish Wall Street titan who runs a multi-billion dollar private equity fund. Rich and Amy met at the conference a year ago, shared a moment of passion, bonding over the shock at how their lives had turned out, then spent the winter exchanging hot texts and emails. Now they’re back.

On the first day of the conference, at the annual softball game, Amy trips on second base and breaks her wrist, and is taken off the field by paramedics. Beside himself with guilt and longing, torn and confused about how to comfort her, Rich wanders into a jewelry store and accidentally buys a bracelet, wiping out his family’s checking account, which is also their savings account and was supposed to pay for his daughter’s preschool in the fall. He then accompanies Amy through a near-death country-doctoring to complete the most arduous seduction in history. At this point, Rich comes to realize that all anyone needs for wild sex are two people who know each other just well enough to feel safe but don’t share a kitchen. In the delightfully wicked events that follow, these people entirely unravel.

This is an unforgettable tale of love and adultery, set against the landscape of a New England fishing village, with pornographic sunsets and The Sea Breeze Motel. Because of its location, the conference has an easy time attracting poets, skittish teenagers in search of illicit pleasures, old guys, driftwood sculptors, printmakers, actors, and playwrights. On the faculty are Nobel Prize-winning storytellers, talented performers, biographers, addicts, drunkards and perverts, one hit has-beens, mid-list somebodies, and legitimate stars. There is a kind of heated, inordinate bonding that happens among grown-ups, forced out of their decorous privacy, into visceral closeness, that has the feeling of an open-air loony bin.

I am at an impasse here. I really don’t know what to write for the review of Who Is Rich. This is one of those rare books that I can’t find any words for. And believe me, for me not to have words to describe a book is very rare. I am going to keep this review short and sweet.

I did enjoy reading Who Is Rich. It wasn’t a fast read and I did have to reread some chapters to understand what was being said and how it related to the story. Being told from Rich’s point of view, I actually empathized with him during most of the book. He was struggling with a wife who was in chronic pain and who might have been depressed (her actions during the book made me think that), a daughter and a son who refused to sleep at night (know that feeling) and a career that was over before it began. But my empathy for him began to fray after he slept with Amy and spent their savings on that stupid bracelet. But, that was his wake up call and he did try to make things right. Stress try.

I liked that I could also relate to Rich. Having 3 children myself, I have wondered the same things he did at times. I have felt that my relationship was buckling under the stress of having 2 toddlers and having a baby later in life (I was 36 when my now 3.5-year-old was born). I have felt that I needed to get away. I got him, I truly did. What I didn’t get was instead of talking everything out with Karen, his wife, he cheated on her and had an emotional affair with Amy for over a year.

While I liked that the author went into detail with his characters, I did feel that some parts of the book were too detailed. Like, I didn’t know that a character needed braces (not how it was phrased in the book). Stuff along those lines. I felt that instead of adding to the story, it overwhelmed it.

The end of the book was what I expected, with all the plot lines resolved. I just wish that I felt that things were going to be resolved between his wife and himself. I also thought that he lucked out, big time because Karen didn’t even notice the missing money in their account.

How many stars will I give Who Is Rich: 3

Why: Good plotline, realistic characters. I did think the book was a little wordy, hence my star rating, but overall, I liked it. Also, the drawings were creepy but an original way to star some of the chapters.

Would I recommend to family and friends: Maybe