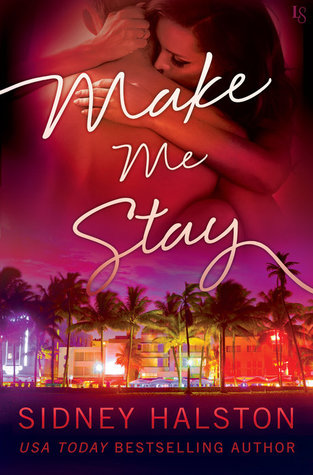 Where you can find Make Me Stay: Amazon

Secret identities, second chances, drama, desire: It’s all going down in Miami Beach in this tantalizing novel from the bestselling author of Pull Me Close, which was hailed by Aurora Rose Reynolds as “a heart-gripping story about . . . the power of love.”

April: Walking away from Matt Moreno was the hardest thing I’ve ever done. Lying to him was a close second, but for his safety, I had no other choice. I was undercover, working to put some nasty people behind bars. But when Matt nearly recognizes me on Lincoln Road a year later, all those very real feelings come rushing back. Now that my assignment’s almost over, will he understand why I lied? Why I had to leave? Most important, can he ever forgive me?

Matt: I was madly in love with June Simpson . . . or, at least, with the woman I thought was June. Then she just disappeared while my family’s nightclub went through hell. And after months of searching, when I think I’ve finally found that sexy, raspy voice and those exquisite blue eyes, she slips away once more. Turns out, “June” is actually Detective April White. She’s been playing me the whole time. And she’s about to rock my world all over again.

Make Me Stay is the second book in the Panic series. Set in the hot, hip city of Miami, you are taken on a smoldering journey with April and Matt as they learn to love each other again after betrayal rocks their world. If you dare, enter a world of sex, drugs, and betrayal and expect to have your world rocked.

Matt didn’t get off on such a great foot with me. His anger and trust issues almost ruined the book for me. I understand that April/June did a huge number on him by just walking out and not saying anything. I really do. And I can understand his anger when he sees her again. But, when she got injured and had no memory. Then his anger seemed, well petty because she couldn’t remember anything. I mean, she would do something and Matt would go off in a tizzy. I seriously wanted to reach through the book and smack some sense into him. Also, with him blaming her for getting his father arrested. Everyone, including his twin brother, tried to tell him that his father did that to himself (which he did) but it took an actual visit to his father to get it through his thick skull. What saved him from me not liking him totally was that he really, truly loved April/June and that he did push past most of those feelings to take her in when she was injured.

April/June, I liked. I understand what she did for a job, deep undercover, was not the perfect way to start a relationship with Matt. But, she did come back after her last case was solved to try to explain. She truly loved Matt, warts and all. I was devastated when she was attacked and lost her memory. She was so verunable and she knew something happened with Matt, she just didn’t know what. I also like that she had Crohn’s disease but she didn’t let it rule her life.

The sex scenes between Matt and April were beyond hot and I couldn’t get enough of it.

The ending was great and was a tear-jerker.

How many stars will I give Make Me Stay: 4

One thought on “Make Me Stay (Panic: Book 2) by Sidney Halston”