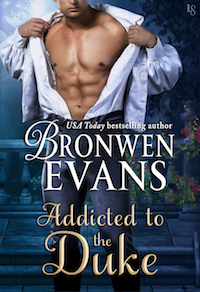 Title: Addicted to the Duke

Addicted to the Duke – Book 1

Where you can find Addicted to the Duke: Amazon

A lovestruck lady charms the Duke of her dreams during an expedition on the high seas in this sexy, swashbuckling novel from USA Today bestselling author Bronwen Evans.

Alexander Sylvester Bracken, Duke of Bedford, has a mission: sail to the Mediterranean and track down Lady Hestia Cary’s missing father. It is a straightforward task, but for two rather vexing complications. First, the sea holds painful memories; second, for her own safety, Hestia is to accompany him. As Alex battles the demons of his past, he must also resist Hestia’s surprisingly skillful attempts at seduction. After all, Alex has sworn to leave her untouched, and he intends to honor that vow—until he can properly ask the Earl’s blessing.

Ever since His Grace rescued Hestia from the arms of a Turkish pirate six long years ago, her heart has belonged to Alex. So when he agrees to help find her father, Hestia is thrilled. Although Alex tries to hide it, there’s passion in his eyes—and a frisson of desire in the air—whenever they meet. On board ship, miles from home, Alex won’t be able to deny her any longer. But with scoundrels lying in wait, she may not live to tell the tale of her conquest.

Do not judge Addicted to the Duke by its cover. Why you ask? Well because the cover doesn’t do this book any justice. While it is nice to look at, and who doesn’t like a bare-chested man who is in the process of ripping his shirt off, I do think that the cover should have included Hestia. Normally, I am like “No women on the cover” but Hestia earned a spot in my heart because of everything that she went through and how she loved Alex unconditionally. Actually, thinking about it, maybe Hestia should have been featured instead of Alex. Just saying…

I loved, loved, loved the note that the author included before the prologue. It explained so much about Alex and his dependency on laudanum and opium. It also explained how addiction wasn’t even given a name until 1909. Which is a full 102 years after Alex’s experiences. I thought it was very helpful that she included that because, like Bronwen said in the note, no one understood that opium and laudanum were addictive. So everything that was written about Alex, the view people had on those substances and how widespread they were was historically accurate. And I can’t tell you how much I love it when an author does their research and gets it right in the book!!

Alex was so tortured by his years of captivity by Murad, a self-titled Sultan, and pirate, that he felt he couldn’t be loved or love anyone. The author never lets the reader know what exactly Alex experienced at the hands of Murad but she drops enough hints that I thought I knew what happened and I felt awful for him. No wonder he had nightmares, 7 years after the fact. He suffered from PTSD (not that it was even recognized back then) and extreme self-loathing. The only person who accepted him, scars and all, was Hestia but he wrote it off as hero-worship and figured that if she knew the truth that she wouldn’t want anything to do with him. Which wasn’t the case. I cried, ugly cried, during his flashbacks and when he finally told Hestia about his addiction and what happened with Murad.

Hestia was so completely opposite of what Regency era women were supposed to be and it was a breath of fresh air. She wasn’t afraid to stand up for herself, her interactions with Murad and Alex definitely showed that. She didn’t let the fact that her father warned Alex off of seeing her (citing his addiction to opium and laudanum but there was another reason and it was really awful) scare her off. She loved Alex completely and she was able to take everything that had happened to him, process it and not let it cloud her love of him. Even his relationship with Tulay (read the book to find out who she was). She was perfect for him.

The sex scenes and there were a few, were hot. The only thing I didn’t like was when Alex and Hestia had sex for the first time. Alex was drugged when they had sex and thought it was a dream. Now, I understand totally where Hestia was coming from. I mean, the man of her dreams was kissing her and feeling her up. But she should have stopped. She knew he was drugged. But she went ahead and gave him her virginity anyway. Which didn’t sit right with me when I read it. Other than that first scene, everything else was burning!!

I liked how all the plotlines got resolved at the end of the book. I cheered when Alex, Hestia, and Murad had it out at the end of the book and honestly, Murad got what was coming to him. The only thing that even left a bad taste in my mouth was how Hestia’s father treated Alex. I was pretty ticked off about it and loved that Alex finally stood up for himself. The epilogue, though, was my favorite part of the book. I was in tears reading it and all I have to say is “Yes!!” (read the book if you want to find out what made me have that reaction)

How many stars will I give Addicted to the Duke: 4

Why: Loved the storyline and the characters. All were vividly written. The only thing that turned me off was that one sex scene.

Why: Sex and violence. Also drug use

2 thoughts on “Addicted to the Duke (Imperfect Lords: Book 1) by Bronwen Evans”