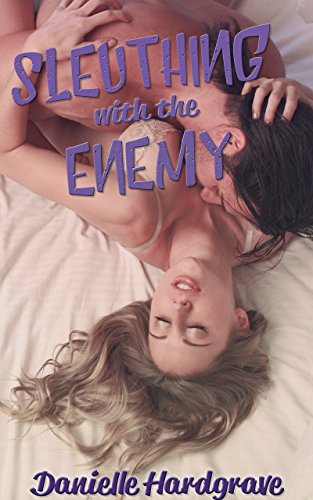 Title: Sleuthing with the Enemy

Sleuthing with the Enemy – Book 2

Where you can find Sleuthing with the Enemy: Amazon

Somebody just stole a valuable artifact from the Helsen archives, and Annemette Helsen—a very pissed off werewolf—is going to make sure they pay for it.

He also claims to be innocent, so the fact that she just broke into his home and attacked him is problematic.

And his price for keeping silent about the whole debacle? Downright devious.

The short novel you’re about to consume is quick, quirky, and delicious. Get ready to enjoy the main course of romance with a side of adventure. Buckle up, it’s about to get sassy!

Sleuthing with the Enemy is one of those books that would be perfect to read by the pool or on the beach. It doesn’t have a complicated plot, is a standalone book in the Unnatural Alliances series, the characters are relatable and the sex was hot.

I was very surprised by Sleuthing with the Enemy and it was a good sort of surprise. I knew I was getting a sexy mystery when I read the blurb but I wasn’t expecting how much I was going to like the storyline. I like anything with paranormal or fantasy in it (honestly, I like all books equally but that’s between us, ok) but vampires and werewolves are my favorites.

The plot of this story was very straightforward. A valuable bracelet was stolen and a vampire prince is identified by the werewolf who was injured during the attack. Annemette Helsen, the hot-headed only sister of the werewolves who is charged with protecting any artifacts that are in their possession, decides in a moment of drunken impulsiveness, to go to Jonas Weiss’s house and confront him. And we all know how plans that are made when you are drunk end up….lol.

Annemette was a self-centered, hot-headed, brat for most of the book and she owned it. She made no excuses for how she acted (well maybe blaming Anders for moving her family to Seattle after their parent’s deaths and that is understandable considering how they died and who killed them. Personally, I thought that she needed anger management classes and a therapist. I mean, when she got pissed off, she would run to her bestie to complain about how unfair things were and then eat her out of house and home. All while her bestie has her own issues. Her relationship with Anders, her older brother, was awful. She regarded him as the enemy when all he was doing was trying to protect her. Of course, she comes to realize this but I kinda wanted to reach through the book and smack her upside her head a few times.

She also hated vampires. With a passion. Which is understandable because of how her parents died. But when she went to Jonas’s house on a drunken whim, she wasn’t doing it because she wanted to find the bracelet. Nope, she wanted to kill him and make him pay for her parent’s death. So she breaks into his house and attacks him. Fortunately for him, she was drunk and he was able to handle her.

I loved how things went from zero to sexy within a few chapters with Jonas. He was, in Fat Bastard’s words, Dead Sexy. I put my Kindle down after reading his description and thought “Oh, if he could come to life. I want him”. He had a vested interest in getting the bracelet back seeing that he was framed by a look-alike and he wants to get the bracelet back. Plus, he seems to like Annemette and actually puts up with her anger problems.

The sex scenes were insane. They were on fire and I couldn’t get enough of it!!

While I liked the rest of the story, the ending seemed rushed. While the mystery of who took the bracelet was solved, the bracelet itself wasn’t found. Nothing was really solved but there were new leads to follow in the next book. I just wish I didn’t get the rushed feeling at the end of the book. Because other than that, I thought the book was great.

How many stars will I give Sleuthing with the Enemy: 3.5 (rounded up to 4 for Goodreads and Amazon)

Why: Great characters, a great plot line and sex scenes that were scorchers.