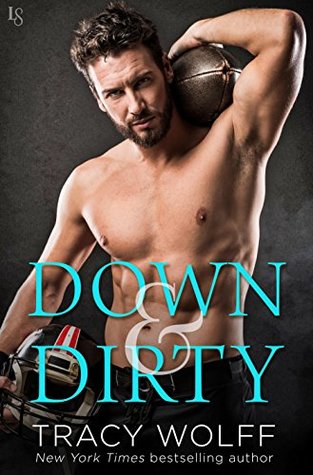 Where you can find Down & Dirty: Amazon

This hard-bodied football star is used to scoring. But he needs all the right moves to get past a fiery redhead’s defenses in a steamy standalone novel from the bestselling author of Ruined.

Emerson: Talk about bad first impressions. I have too much riding on this job to show up late on my first day looking like the winner of a wet T-shirt contest, all thanks to an arrogant quarterback who drives like he owns the road. Hunter Browning thinks that because he’s famous, he can fix everything with a smile and a wave of his hand. He’s too bronzed, buff, and beautiful for his own good. Or mine. I can’t let on that I’m a fan . . . no matter how much fun we’d have in the sack.

Hunter: Hitting that puddle was my best play since winning the Super Bowl with a touchdown pass. Sure, it’s not my preferred way to get a girl wet, but I’ll make an exception for Emerson Day. She’s got a sharp tongue and a red-hot temper, even with her soaking clothes plastered to her every curve. Now I know exactly what my next play will be: hire Emerson as my personal real-estate agent, save her job—and see if I can take her off the market.

Don’t let the blurb fool you, Down & Dirty is not one of those books where the main characters have sex as much as possible and there is no plot other than the sex. Nope, there is actually a plot in this book and I was completely surprised by it. So any book that takes me by surprise automatically gets an extra star rating from me…..lol.

I felt awful for Emerson at the beginning of the book. I mean, her car breaks down, her Uber driver took forever, she gets soaked to the skin by Hunter when he pulled up in his car and then, the icing on the cake, she gets her boss mad at her by unintentionally taking Hunter’s sale away from her. So I don’t blame her for being kinda of a witch with a b to Hunter when they go out looking at houses. I think I would have said worse to him, to be honest. The ice did break when they went to that house with the erotic statues in the backyard and it broke in a huge way. And when I say broke, I mean she decided to get down on her knees and copy some of the statues….haha.

Hunter came across as a complete and utter jerk at the beginning of the book. But, as the book went on, he actually came across as a very stressed out guy. His sister was dying of cancer and he was scrambling to find a house for him, her, his niece, nephew, and their nanny to live in before she passes away. He made a decision the day he met Emerson to have her show houses. Emerson’s boss, who was a witch with a b, wasn’t showing him the houses that he liked. He thought that Emerson would. What he didn’t expect was to fall hard for her.

I will say that the author did leave the ending open for other stories with the players from Hunter’s football team. If there is, I really can’t wait to read book 2.

How many stars will I give Down & Dirty: 4

3 thoughts on “Down & Dirty by Tracy Wolff”