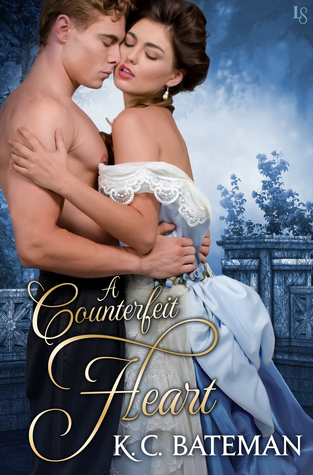 Where you can find A Counterfeit Heart: Amazon

As Sabine de la Tour tosses piles of forged banknotes onto a bonfire in a Paris park, she bids a reluctant farewell to her double life as a notorious criminal. Over the course of Napoleon’s reign, her counterfeits destabilized the continent and turned scoundrels into rich men, but now she and her business partner must escape France—or face the guillotine. Her only hope of surviving in England is to strike a deal with the very spy she’s spent her career outrunning. Now after meeting the arrogant operative in the flesh, Sabine longs to throw herself upon his mercy—and into his arms.

Richard Hampden, Viscount Lovell, is prepared to take any risk to safeguard England from the horrors of the French Revolution. To lure the insurgents out from the shadows, he’s even willing to make a pact with his archenemy: Philippe Lacorte, the greatest counterfeiter in Europe. But when a cheeky, gamine-faced beauty proves herself to be Lacorte, Richard is shocked—and more than a little aroused. Unlike the debutantes who so often hurl themselves at him, this cunning minx offers a unique and irresistible challenge. Richard will help her. But in return, he wants something that even Sabine cannot fake.

I find the times around the French Revolution very fascinating.  I haven’t read a lot of books, romance and otherwise, that even touch upon it. If I do happen to read a book in that time frame, references are given but nothing is really talked about. So, when I read the blurb for A Counterfeit Heart, my attention and interest were immediately caught. I was also really happy to see that it was book 3 in the Secret and Spies series. Having read A Raven’s Heart, I was curious if Richard would get his story and who his love interest would be. I wasn’t disappointed.

The plotline of A Counterfeit Spy was surprisingly action-packed. Mostly, when I read a historical romance, it follows a set plotline and this one deviates from that. Which made it very enjoyable for me to read. Don’t get me wrong, I absolutely love a historical romance that is standard…meaning that the heroine is sweet but weak, the hero is strong and tortured and there is a dastardly villain that is easily defeated thrown in. With this book, though, those stereotypes are rewritten. The heroine is most definitely not weak and thinking about it, she really wasn’t sweet either…lol. The hero is strong but I wouldn’t say that he was tortured. He held guilt over several incidents in the past but, for the most part, they didn’t carry over into the present day. The villain was not easily defeated either. He was actually carried over from the 2nd book and I believe he started in the first one (didn’t read it).

Sabine, I liked. For that time, she was an anomaly, a woman who didn’t need a man to survive. She only went to Richard because she needed the money to escape to America and build a new life for herself. She was also very sassy and wasn’t afraid to put Richard in his place. She also was very secretive but she needed to be. She had some pretty powerful people who were after her alter ego, Philippe Lacorte. I thought it was pretty refreshing to read about a heroine who was a criminal and who was honest about it. I mean, she did approach Richard about working for him and had no shame about admitting about her criminal past.

I couldn’t get that into Richard at the beginning of the book. I think it was because he came across as so harsh at the beginning of the book when Sabine appeared on his doorstep. But he did grow on me as the book went on. I think the reason I didn’t really like him was that he was so intense, so focused on getting that group arrested but he wasn’t afraid to use Sabine to make that happen. But he did grow on me during the book. I could tell that he had growing feelings for Sabine and that his actions were being influenced by them.

The romance between Richard and Sabine was a slow burn. I mean, you know that it was going to happen but I love how the author chose to stretch it out. Feelings were conveyed with a look and a touch. Everything was built up so that when they finally kissed (and had sex), my pages just about combusted. And it didn’t stop with that one scene. Every scene after that was the same way and I was pretty impressed by that. It is very rare that an author can have sex scenes that are as good as the first one.

The end of the book kept me on my toes. So much went on in such a short amount of time that I did have a small issue following everything. There were a couple of plot twists. One I saw coming and one took me by surprise. But still, even with the twists, I was very happy with the ending.

How many stars will I give A Counterfeit Heart: 4

Why: A wonderfully written historical romance that had a great plotline and relatable characters.

One thought on “A Counterfeit Heart (Secrets and Spies: Book 1) by K.C. Bateman”