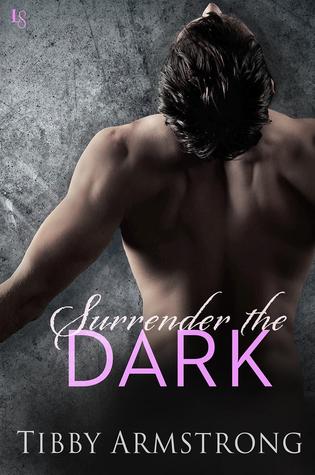 Where you can find Surrender the Dark: Amazon

As a provocative series of paranormal temptation begins, a vampire king seduces the supernaturally gifted man hunting him. But when the stakes are literally life or death, their struggle for control is no game.

Benjamin Fuller is a hunter, born and bred. Blinded as a child by the vampire who slaughtered his family, he’s blessed with a second sight that allows him to catch and kill his quarry. What his gift can’t help him see coming is his fierce, almost carnal attraction to the mystery man who claims to be a fellow hunter and whose touch triggers both lust and revulsion. When he gains the upper hand, Benjamin vows to bring his enemy to his knees.

After many years spent in exile, the only one who can help restore Tzadkiel Dragoumanos to his rightful place as War King is a blind hunter with golden curls, a lithe dancer’s physique, and distinctive facial scars—scars Tzadkiel gave him two decades ago. The mere scent of Benjamin Fuller provokes an unwelcome rush of insatiable desire. Yet to win an all-out supernatural war, Tzadkiel must resist the ravenous hunger to possess his prey—for now.

Kill the vampires or you’ll be dead

I really didn’t know what I was getting into by reading Surrender the Dark. I knew, from the blurb, that the book was going to be dark but I really wasn’t expecting how dark it got during the book. Not that I minded because that darkness made the book so good to read. Also, take a look at the cover. Normally I don’t comment on the cover of books but I had to on this one. It fits the book perfectly. The half-naked man standing, with his back to the reader, his arms out at his side and looking up at whatever is beyond the cover. Love it!!

Benjamin was a very interesting character to read. The book actually starts off with a prologue when he was 8 years old and taking “lessons” from his uncle. What lessons is he taking? How to kill vampires and these are lessons that Benjamin do not enjoy. On that particular day, his Uncle decided it was the time that Benjamin made his first kill and left him in the dungeon with an incapacitated vampire. Which was a mistake, of sorts, because Benjamin, in a moment of sympathy for the vampire, decided to give him some water and that set off a series of events that ended with his parents and uncle getting killed, Benjamin losing his eyes and the vampire escaping. So to say that he has some issues is a huge understatement.

Fast forward 20 years and Benjamin is avenging his parents and uncle’s murders by taking out vampires one by one with the help of his friends: Nyx: a half faery, half witch and in hiding from her parents, The Morgan who is the powerful head of the coven and Lady Morgana, who is the queen of the fae, and Akito: a regular human who Benjamin met while in the psych ward and who wanted to be a superhero. While Benjamin is blind (acid in the eyes can do that to you), he can see auras. Which does come in handy while fighting vampires.

Tzadkiel is the vampire who Benjamin’s parents and uncle had in their basement all those years ago. After murdering Benjamin’s parents, Tzadkiel goes into what I can only describe as hibernation mode for 20 years. The last thing that he thinks about is Benjamin and has a thirst for revenge. He finds Benjamin in a bar, drinking away the memories of his family and the vampires that he killed. His thought of revenge is put on the back burner when a greater threat is revealed that threatens every single supernatural being in Boston.

The world building and character building were fantastic. I love it when an author is able to suck me into a story right from the get go and when I finish the book, leave me wanting for more. The fact that this book is set in Boston cemented the deal for me. I grew up around Boston and it thrills me to no end when an author makes an effort to actually get the geography and the feel of a city right off the bat and this book did that. And the character building….oh my god. Each character, even the secondary ones, had layers to them and it was wonderful to see Tzadkiel and Benjamin’s layers pulled back and their true selves revealed.

Now the all-important sex scenes. The author let the sexual tension build in the book until the characters couldn’t take it anymore and then the fireworks happened. What I loved is that Tzadkiel and Benjamin had sex only a few times in the book and so much was conveyed with a look and a touch. The sex was off the pages hot. I had to fan myself after the first scene because it was so steamy. But what got me even more into it was that the feelings that both characters started having for each other. I think I fell in love with Tzadkiel before Benjamin did.

The end of the book was a bit of a surprise. I felt awful for Akito and actually can’t wait to read his story. The HEA with Tzadkiel and Benjamin was fantastic.

How many stars will I give Surrender the Dark: 4

Why: Great world and character building, great subplots and a romance that took my breath away.

Why: Language, violence, and sex. There is a pretty horrific scene where Benjamin loses his eyes.

One thought on “Surrender the Dark (The Dark: Book 1) by Tibby Armstrong”