Title: Sex in the Sticks

Where you can find Sex in the Sticks: Amazon

Wake up and feel the wood! In the first of a series of irresistible standalone romances from New York Times bestselling author Sawyer Bennett, a city girl rediscovers love and lust in the Alaskan wilderness.

Valentine French may be the sassiest dating columnist in New York City, but the abundance of metrosexuals in her adopted metropolis is seriously cramping her style. Where are the beefy all-American boys? Hoping to find some inspiration, Val heads to Alaska, where the men outnumber the women fifteen to one and wrestle grizzly bears for sport. Or so she can only imagine. Suddenly the most eligible bachelorette in a town full of horny lumberjacks, Val is writing her best columns ever. But if she doesn’t get her nose out of her laptop, she just might miss out on Mr. Right.

Logan Burke is the sheriff of the little podunk town that Val finds so charmingly backward. He’s not that different from the guys she’s using for her little experiment; it’s just that one date would never be enough for Logan. As he listens to Val complain about love over beers in the local tavern, he realizes that she can’t see the forest for the trees. Because if she would ever give up her Prada bags and fourteen-dollar martinis, Logan would give her the only luxury that matters: his heart.

This is the first book that I have read from Sawyer Bennett and I am going to say this now, it will not be my last. I will admit that I was a little put off by the blurb when I read it on NetGalley but decided that I should give this book a try. I am glad I did because this book was a great read. It had humor, drama and let’s not forget lots and lots of hot sex.

I really didn’t care for Val at the beginning of Sex in the Sticks. She came across as a poor little rich girl who was bored of her life in New York City. And when I mean bored with her life, she was bored with the metrosexual men that she was dating. She was a well-known blogger who wrote about her escapades and her dates, lately, were boring her. Actually, if it wasn’t for her hair color and that she was über rich, she reminded me of Carrie Bradshaw from Sex in the City: 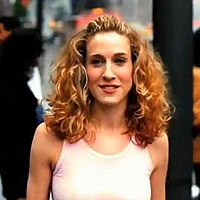 Val needed a change of scenery and when her cousin suggested Alaska, where the men to woman ratio are 15 to 1, she jumped on it and planned on blogging about it. All I could do is shake my head and laugh because I knew that she would be out of her element. Which she was. From the minute she landed in Alaska, I was giggling when she got herself into predicaments. Except for the one with Sassy, her dog. I didn’t giggle at that because it was dangerous. But, by the end of the book, I liked her. She totally shed her poor little rich girl skin. I will go as far as to say that she found herself in Alaska.

Logan exuded hotness from the minute he appeared in the story and he seemed to be immune to Val’s charm. Actually, he was kind of put off by her deciding to date her way through town. His immunity to Val was worn down after he was called to the local bar because according to a jealous woman, she was drunk, naked, and dancing on tables. When he arrived to arrest her, he discovered that she was two out of the three. That’s when, in my eyes, he gave in…haha. But it was when she was lost in the woods, that the magic happened and you could see him falling in love with Val.

Let’s talk about the sex. I loved that Val was sexually confident. She knows what she liked when she liked it and how she liked it. Having a sexually confident woman in these types of books is pretty awesome. I also think it was pretty awesome that Logan was willing to go along with what Val liked. What also cracked me up was how shocked she was over Logan’s size. I thought to myself “Val, you are a sexually active woman and it is hard for me to believe you have never seen one as big as his”.  Every, single time. Made me giggle during scenes that I shouldn’t because I just had a mental image of her doing something like this when she saw it.

I loved the end of the book. Everything was done on Val’s terms and Logan, well, let’s just say that it took him a while to go along with her plans. The epilogue had to have been my favorite part of the book. I love happy endings!!!

How many stars will I give Sex in the Sticks: 4

Why: Relatable characters, a plotline that was pretty funny and page burning sex scenes.

1 thought on “Sex in the Sticks (Love Hurts: Book 1) by Sawyer Bennett”

I would like to thank the author and the publisher for allowing me to read and review their book. Any opinons stated in this review are mine and are not relfections of the publisher/author. I have also recieved zero finanical compenstation from any author/publisher featured on this site.
Any Amazon links featured are part of the Amazon Associated Program. A small purchase goes a small way towards maintaining this blog but you are under zero obligation to buy anything.