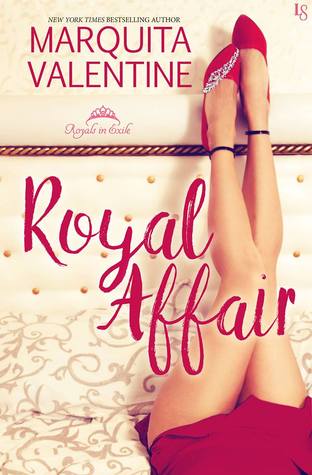 Where you can find Royal Affair: Amazon

A sheltered princess goes wild—and makes the best mistake of her life—when she falls for a roguish reporter in this fun, sexy romance from the bestselling author of Royal Scandal.

Online muckraker Brooks Walker has a reputation for exposing the political élite. Now he’s set his sights on the Sinclair siblings, who’ve been embroiled in their fair share of drama ever since their exile to North Carolina. But Brooks has never been afraid to get his hands dirty—until he meets a royal wallflower at a charity ball who makes him reconsider everything. Is Brooks feeling guilty because he knows all the sordid details of her family’s history? Or because he’s putting their relationship first, before his journalistic integrity?

As the “spare” twin, Princess Charlotte has always been the responsible one. So when her sister finally agrees to fulfill her duty as queen, Charlotte gives herself permission to break a few rules by flirting with the very off-limits CEO of Walker Media. Brooks is the worst sort of man to start an affair with, but Charlotte just can’t help it. The trouble is since she’s no good at playing games, soon she’s tiara over heels in love. And when Brooks comes clean, Charlotte must decide whether his confession is worth a royal pardon.

Have you ever wanted to read a book where the villain got his happily ever after and he got it with one of the fairytale characters? Well, read Royal Affair because that is exactly what happens here. Starting off hot and steamy and ending with a very surprising happily ever after, Royal Affair made me run the gauntlet of emotions while reading it. I went from being insanely happy to almost depressed within the same chapter. Now, normally that would throw me off a book, but in this case, it made me like it more.

Royal Affair is also one of those books that eclipse the first book in the series. Now, don’t get me wrong, I loved it when I read Della and Colin’s romance. It was just that it was missing something and I couldn’t put my finger on it. Then I read Royal Affair and went, “Ahhhh, that’s what’s missing.” What was missing was genuine feelings that developed between Brooks and Charlotte. Della and Colin didn’t have that (read my review on Royal Scandal….it is linked above).

I really liked Charlotte. She was so sweet and had an innocence that just made you want to shelter her even more than she had been. She has been through a lot. From the deaths of her parents to finding out who her biological father was (read the book if you want to find out) to being outed by Brooks. she has been through the wringer. It left her with anxiety issues and honestly, as a person who suffers from anxiety, I really liked that the author chose not to make her issues go away. Instead, they were right out in the open and she was dealing with them as a regular, real-life person would do.  There are a couple of huge secrets that aren’t revealed until halfway through the book. Both I didn’t see coming….at all and both made me go “No way” when they were revealed. So, slow clap to the author for doing that!!

Brooks, who was made out to be a jerk in the first place, really wasn’t that bad of a guy once you got to know him. He had a razor-sharp wit and he knew how to negotiate a bargin….which is what he did when he first made that deal with Charlotte. He was a business person up until David contacted him with an envelope and some damning information about Charlotte and Imogen. He just couldn’t open that envelope. It was then that I knew he had serious feelings for her.

Besides that two plot twists that I named above, there is one that I saw coming from a mile away. It is my only complaint about the book is that. I really wish that it didn’t go there.

The sex between Charlotte and Brooks were very, very hot and they did the nasty in some pretty interesting areas. Just read the book to find out where 🙂

The end of the book was pretty bittersweet. It was sweet because Charlotte did get her heart’s desire but bitter because Brooks had to take such a personal hit. I loved the epilogue and can’t wait to read Theo’s story!!

I did have a couple of questions:

Was Briggs accident truly an accident? Because with everything that was going on I wouldn’t have been surprised if it wasn’t.

Who sent that text to Brooks? If it wasn’t Charlotte and if it wasn’t Imogene….then who was it?

Why is Davis so darn slippery? He is seriously starting to annoy me

How many stars will I give Royal Affair: 4

Why: Great characters, an engaging plot and hot sex equal a fantastic read

One thought on “Royal Affair (Royals in Exile: Book 2) by Marquita Valentine”