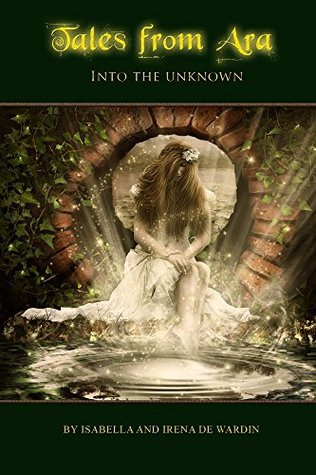 Title: Tales from Ara: Into The Unknown

Where you can find Tales from Ara: Amazon

Single and hopelessly romantic, Harlette is your everyday girl who dreams only of two things: falling in love and finding her place in the world.
Her relatively uneventful life takes an unexpected turn when she is transported into another world, Ara, without so much as an explanation or even a decent pair of trousers.
Wearing nothing but underwear and stilettos, she finds herself in Nimrod’s forest, just to be captured by the elven king Karayan and his guard. Nimrod is Ara’s strongest kingdom, and Karayan is the most powerful of elves.
Despite developing a keen interest in her, humans are a rare sighting in Ara and usually a bad omen; this makes Karayan suspicious of Harlette and even, disagreeable…
Thrown into the middle of a rising interdimensional war, marked as a trespasser and with no way of returning home, Harlette is dragged into a series of adventures and soon finds out that this fairy tale – no matter how cruel or beautiful – is no longer the fruit of her imagination. Love is not as easy as it is in romance novels and she will need to harden her heart and mind if she wishes to survive the upcoming whirlwind of events that will befall her.
Will Harlette discover the purpose behind her sudden arrival in Ara, and will she be strong enough to face the challenges thrown at her?

I enjoyed reading Tales from Ara. The overall plot, which reminded me of Alice in Wonderland, was great at first. Young, innocent girl falls through a mirror into a strange land and ends up having the adventure of a lifetime while trying to figure out why she ended up in Ara. I loved it and couldn’t read those chapters fast enough. Then Karayan found her and the plot started to get a little less great. By the end of the book, I was a confused mess because the plotline did so many switches that my head was spinning.

While Harlette was one of my favorite characters in the book, she also kind of annoyed me. She came across, in some scenes, as amazingly immature and she kept getting herself into situations that made me go “Seriously why didn’t you listen!!”. She was also very naïve and didn’t heed the advice of Karayan or Bernard, her cat. But, like I said, I did enjoy her character. She was kind and she believed the best in people. She also brought out the best in her companions….mainly Karayan.

Oh, let’s talk about Karayan. Honestly, I thought he was a controlling jerk who kept jerking Harlette around by her emotions. But there were some glimmers of a decent elf underneath all of that. He cared about his people/kingdom and would do anything to keep them safe and I also think that he did care for Harlette, even though she was a human. Again, glimmers and if the author could extract those out, I think the next book would be 100% better.

The whole storyline with Christine was well weird and I couldn’t get into it. I wish that more was given into Christine’s background, other than being Harlette’s foster-sister. I mean, it is revealed that she is a witch, that has almost no powers, and she is the one who sent Harlette into Ara. When I say that the storyline is weird, it is almost like it was put in there to fill in space because, to be very blunt, other than revealing the identity or Harlette’s mother and father, it added nothing to the storyline. Also, she and Harlette’s parents kept referring to Harlette as “The Daughter” but no explanation was given, which drove me absolutely nuts.

The main storyline with Harlette and Karayan really threw me for a loop. I loved it up until they stumbled upon the beanstalk. Harlette and Karayan were actually getting along until she decided to take the giant queens challenge to defeat the spirit and had to get Karayan out of the chains. Which they did by sharing an amazing kiss. It was after that when Karayan decided to teach Harlette what she was missing, that the book kind of went sideways and backward. Not going to get into it but I didn’t like the total idiot Karayan became to Harlette. It bothered me on so many levels.

The ending of the book was a cliffhanger and you all know how I feel about that.

I do have some questions and a repeat of one already asked above that I hope will be answered in book 2:

*Why are the mantises so bad? I know that it was touched upon in the book but I am beginning to think that there is a more personal reason that Karayan doesn’t like them

*Why did Harlette’s parents leave her on Earth? Just saying, because now, my opinion of them isn’t that great.

*Who is Christine, really?

and the burning question that I really wanted to be answered:

*Why is Harlette called The Daughter!!

How many stars will I give Tales from Ara: 3

Why: While I did say that I liked the story (I did), what brought my rating down from the 4 that would have given it to a 3 is this: I couldn’t relate to Harlette or Karayan. Also, I was left very confused by the end of the book. Not because of the cliffhanger but because of the 180 Karayan did with Harlette. It confused the heck out of me.

Why: Violence and one very explicit sexual scene

One thought on “Tales from Ara: Into The Unknown by Irena de Wardin and Isabella de Wardin”