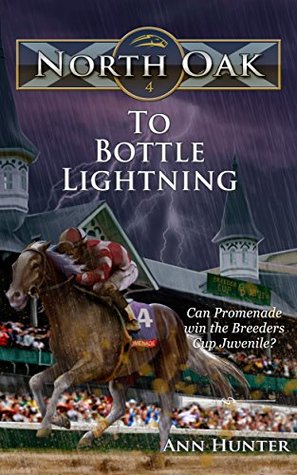 Where you can find To Bottle Lightning: Amazon

Alex is almost fifteen and convinced she’s ready to train for jockeyhood. Only one man stands in her way: North Oak’s gruff old trainer, Joe Hendricks.
Joe doesn’t think Alex can handle the demands of being a real rider– she’s reckless, doesn’t follow instructions, and not exactly humble.
Dejado Augustun, on the other hand, is already licensed to ride, does as he’s asked, and does it well.
He drives Alex nuts.
No way can this Dejado guy be a match for Promenade in the upcoming Breeders Cup Juvenile. It would be easier to hate him if he weren’t so darn nice. Worst of all for Alex, he likes her, and Promenade likes him.

Can Alex overcome her pride and realize she may not be the rider Promenade needs?

I was really happy to see that Alex had come a long way as a person in this series. She is still battling her demons, though, and I was waiting for someone to tell her to get help. Well, color me surprised when not only did Cade and Hilary bring it up but Carol did too. I wanted to cheer when I read that scene. For Hilary to bring it up to her actually meant something to me. It meant that Hilary cared.

What I also liked was that Alex was finally getting answers to her questions. She wanted to know why Cade and Hilary weren’t adopting her and they kept telling her to ask North. Well, North wasn’t answering that question and Hilary finally had enough. She brought Alex to North and told him to answer her questions and left. Which he did and surprised Alex. If you had read Born to Run, then you already knew the secret. But I’m not going to ruin the surprise. Read the books to find out. Oh and I thought his answer why things were left the way they were was bullsh*t. Pardon my French but it was.

I also liked that the author made Alex’s friendships realistic. Her friendship with Carol, which was wonderful, hit a bumpy patch when they started high school. Alex met another girl and Carol started spending time with Dejado…..the jockey that came in between Brooke and Alex’s friendship in Morning Glory. But what I liked, even more, was that Alex was questioning her sexuality and it was done in a way that didn’t take away from the book. She was attracted to her new friend and she also had feelings for Dejado. Even her new friend asked her if she liked girls and Alex couldn’t really answer that question. I loved it!!

Speaking of Dejado, I really liked him but felt he was put in an unfair position with Brooke. Brooke had a huge crush on him and he knew it but he liked Alex. He was very honest about it with Brooke but it did end up hurting her and damaging her relationship with Alex and Dejado. Meanwhile, Alex could care less about Dejado and let him know it. Why he kept on chasing after he is beyond me but I figured because he’s a teenage boy and that’s what they do. But with Alex’s new feelings towards him, I smell romance in the air. Or could the romance be with Carol, who is getting driving lessons from him?

As with Morning Glory, part of this book focuses on a different character. This time, it is Joe. His chapters went back from the time he met Dot, his wife, to when he was offered a job at North Oaks to when Dot was diagnosed and eventually passed away from cancer to when Rowan, Brooke’s mother, showed up pregnant, at his doorstep shortly after Dot’s funeral. What got me was how deeply he cared about everyone, including Alex. That was not something I was expecting when I read his chapters. It made me feel bad for him and I kind of wished that he would open up to Brooke about how he cared about her.

I did think that Alex training to be a jockey was a great move on North’s end. She was a natural rider and she had talent. Her only issue was that she was 15 and she wasn’t trained. So having Brooke, Alex’s frenemy, was a good choice. The two girls actually bonded, which I liked. They had so much going on in their friendship that it was tough to read their scenes. Then Joe took over and Alex started bonding with him too. It was weird to read that because Joe was so against Alex in the first few books.

The end of the book was a nail-biter, for sure but I loved it. I am so ready to read book 5, it isn’t even funny. I do have a couple of questions that I hope are answered in book 5:

Will Alex ever race? (the most important one)

Will she have to choose between Katie or Dejado?

Will Brooke ever get over Dejado?

How many stars will I give To Bottle Lightning: 4