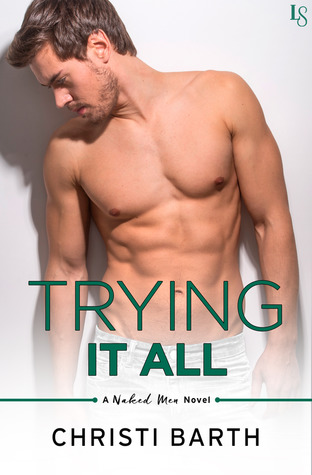 Title: Trying It All

Order. Attention to detail. Never leaving anything to chance. These are the qualities that make Riley Ness such a terrific federal agent . . . and a pain in the ass to everyone else. The only time Riley lets loose is when he’s hanging out with his closest pals. So when he’s thrown together with gorgeous, flighty Summer Sheridan, Riley’s brain tells him she’s a ticking time bomb—but his body doesn’t want to play by the rules.

Riley has to be the most irritating man Summer has ever met. The brooding hunk thinks he needs to teach her a few lessons about real life, while she’d rather show him how to enjoy it. But her BFF’s all but engaged to Riley’s best friend, and besides, their intense physical chemistry is all too real. Summer just needs Riley to try to meet her halfway and take a chance with the one thing that matters: his heart

As I have stated in my other posts, I really hate picking a book up and realizing it is the 2nd to the last book in a series.  There is so much backstory that I feel that I am missing out of and the other characters, who usually are in the book and I am left thinking to myself “What happened to them” and “What is their story”. Drives me nuts and yes, I know that it is all on me. I could just as easily skipped over these books when I was selecting them from NetGalley. But, no, I like to drive myself nuts and continue to request them.

I thought that Trying It All was a pretty interesting book. I loved Riley and Summer’s backstory. When Riley was a teenager, he was involved in a near tragic accident in the mountains of Italy that left him and his friends stranded for 3 days. Summer was the survivor of a mass shooting at her college. What made it interesting to me is that the author explored how to similar traumatic experiences could affect people differently.

With Riley, it made him hypervigilant to scenarios where something could go wrong. He was an expert with what to do in every sort of situation. He even took a job that used his talents (for lack of a better word). He was very detail orientated and never, ever did he take a leap without seeing where the leap would take him and if it was safe. He was so uptight that it hurt reading about it in the book. Which is why Summer didn’t like him. Her nickname for him was FunSucking DeathStar. I started dying laughing when I read that because it was so true.

Summer, however, decided that she had to live life like there would be no tomorrow after she left the hospital. So she did everything to the extreme and refused to let herself have a lasting, loving relationship with anyone. She even mentioned that the word long-term gave her a twitch. All because she might die the next day. I would say that she went the extreme opposite direction that Riley did.

Now, I don’t know how they interacted in the first 3 books, which peeved me because there was a lot of dislike of each other, but I will say that their mutual dislike was very short-lived in this book. Like a couple of chapters short-lived. Then they kissed and everything got turned upside down.

I liked how Summer was able to bring Riley out of his comfort zone on certain things….like paragliding. I do have to say that the kiss they shared while doing that was very, very hot but very unsafe. Good thing that Summer was able to see that and stop it before something happened. But Riley couldn’t make Summer see that sometimes playing it safe was a good thing until a very bad thing happened to her.

The sex scenes were off the pages hot and I liked that the author had them do the dirty in unconventional areas. They had sex on a beach (of course, while I was reading it all I could think of was…ouch sand….lol), in a car parked on the street and in a store on a rug in front of a sofa after hours. Normally reading about people having sex in public places don’t do it for me but this time it did.

The end of the book was typical with a HEA. I am waiting to see if Josh gets his own book. Not that should be interesting to read :).

How many stars will I give Trying It All: 4

Why: I thought that this was a good book with some hot sex scenes. I also liked that not so opposites attract angle of the book. It made for a very interesting read.

One thought on “Trying It All (Naked Men: Book 4) by Christi Barth”