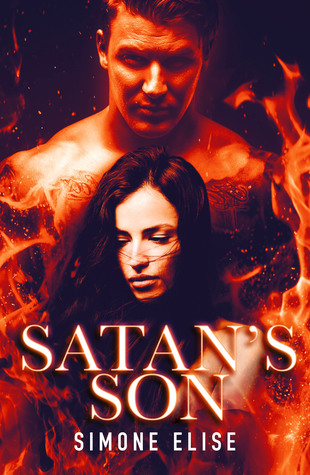 Where you can find Satan’s Son: Amazon

But that’s what happened to Addison. One minute she’s walking along in her average life, worrying about curfew, and the next minute she’s in hell.

Addison was living a typical teenager’s life before being dragged down to hell to atone for her sins on Earth. She must now make up for her bad behavior but is not expecting to meet her match in Ethan. Devilish good looks, charming smirk, an attitude to match, oh, and he’s Satan’s Son. Addison must now navigate the channels of hell with the reluctant guidance of Ethan as he atones for his own error. But could his mistake be closer linked to Addison’s death than she knows? Neither Addison or Ethan were planning to find love but now that they’re here, which will it be: Heaven or Hell?

I think that books about Hell/Heaven? Purgatory is a dime a dozen. But I was intrigued by the cover, the title, and the blurb. The first couple of chapters were really good. Like insanely good and I thought to myself “This book is going to be awesome”. Then the book fell flat and it became a chore to even finish it. Saying that I was disappointed is an understatement.

I mean, I loved the idea behind the book. Where Addison went after she died wasn’t Purgatory but it was kind of like a pre-Hell where people who straddled the line between good and evil were sent to atone for their crimes and then possibly gain access into Heaven or Hell. I do think that if more time was spent in developing that part of the book, then the book would have gotten a higher rating from me.

I couldn’t stand Addison. Listen, I get that there is a market for young adult women who don’t take anything from anyone and I like that. But there is a fine line between headstrong/sassy and being reckless/a witch with a b. Unfortunately, Addison crossed the line early in the book. She just came across as an immature spoiled brat who didn’t care who she ticked off and was used to people catering to her. I mean, even her explanation of her crimes, when she was alive (arson, defacing public property), was horrible. Nothing was her fault and that attitude, unfortunately, stayed the entire book.

Ethan, however, seemed to be an OK guy. Well OK for being the son of Satan. He has a thing for Addison, which I really couldn’t even begin to understand why he liked her. I understood where he felt responsible for her and I understood the reasons why Satan put him in charge of training Addison. But everything else, nope, couldn’t even come close to even understanding it. I wish more was put into his relationship with his parents and sister. Again, which blew my mind because who would think that Satan would be a family man. Not this chick.

The romance between Ethan and Addison seemed forced. Addison didn’t even like him for half the book and then, bam, Instalove on her part. I kinda went “Eh” when I read that part. As much as I thought Ethan was an OK guy, he did come across as stalkerish. Actually, the song Every Breath You Take by The Police is a perfect song for him when he was watching her when she was alive.

Even when they had sex, it seemed off. I am thankful that the author chose to not detail that because it really wasn’t something that I want to think about.

I do wish that the author went through with Satan’s plan to restore Addison to being alive sooner in the book. I think that it would have been a great twist in the plot to have her alive and gradually remember her time in Hell (well, pre-Hell) and then realize her feelings for Ethan than to drag it out for chapters.

There were a couple of loose ends that never got picked back up. Did Addison meet back up with Alex? And more importantly…..why was Satan never given a scene? He was mentioned a ton of times and Ethan actually met with him when he brought Addison to his house for dinner. But no Satan. I was a little disappointed.

The end of the book was technically a HEA with everything turning out alright.

How many stars will I give Satan’s Son: 3

Why: Now, I know most of you are like why a 3 if you didn’t like the main characters. Here’s my explanation: I think that this book could be something if the author took the time to do more world building, character building, fix up some of the dialogue and do an overhaul of Addison’s character. I see the potential in this book and what I see, I like.

Why: Language and some mild violence

One thought on “Satan’s Son by Simone Elise”