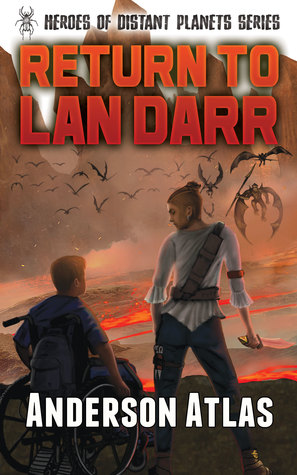 Where you can find Return to Lan Darr: Amazon

Surviving Lan Darr not only changed Allan’s life, but it also rocked him to his bones. On Earth, he’s simply a boy in a wheelchair who got lost in the woods, but across the galaxy, Allan is a hero. He must find a way back there.

Returning to Lan Darr might just kill him. Though Allan’s learned the hard way that he does not die easily.

Back on Earth, Allan’s uncle and his best friend race after Allan without an inkling of how deadly Hubbu travel can be. Chaos ensues, spawning disorder, confusion, and panic as the travelers end up on different worlds at different times and face extreme ecosystems, mysterious enemies and push the clock of death to the absolute breaking point.

The second book of the Heroes of Distant Planet Series cranks up the excitement, the mystery, and even the humor. A perfect and inspiring story for 12 and up.

After reading Strange Lands, I couldn’t wait to read book 2. I couldn’t wait to get back to Lan Darr with Allan and see what adventures were in store for him. I wasn’t disappointed and was thrilled that different worlds were introduced. I love it when worlds are added in a series that had only one world. It totally changes how I see the book. Return to Lan Darr does this and it makes the book magical.

I felt bad for Allan, at the beginning of the book. He went to a wonderful land, became a hero and when he tells people, they think that he is hallucinating and the therapist discussed with Rubic that he may be suffering from a form of schizophrenia. But the biggest blow came when Laura, his best friend, doesn’t believe him and then steals his diary….only to lose it at school and the pages are photocopied and passed around the school. The humiliation (and the fact that Laura wasn’t allowed to hang out with him), made Allan do something rash. He went back to the mountain to prove to Laura and his schoolmates that he was right. Except, he didn’t land in Lan Darr with the first poof of pollen. Nope, he landed in a place called Peebleland (inhabited by bat people). To get to Land Darr, he has to go through a planet called Katonaay to get the flower for Lan Darr. Katonaay isn’t what it seems and when Allan gets to Lan Darr, he is in for a big surprise. If you want to know what, read the book!!

I did like that Rubic tried to be more of a parent to Allan in this book. He settled down, got a job (with a 401K and health insurance) and was preparing to be a “regular” adult (but is there such a thing as being a perfect adult?). When Allan disappeared after inhaling the pollen of a purple Hubbu flower, he does the responsible thing and looks for Allan, then Laura when it comes up that Laura is missing also. But evil is coming his way and when Jibbawk, the evil ex-ruler of Lan Darr, makes his appearance at the house, Rubic goes with him…..looking for Allan. Rubic and Jibbawk have their own adventures while searched for Allan on distant planets with the help of multicolored Hubbu flowers.

Laura has a different sort of adventure, and in a way, made up for her stealing Allan’s diary. Not going to go into it, because doing so would kinda ruin her story, but she isn’t as weak or as helpless as you think she is. She also shows great compassion for certain people at certain points in the book.  Again, I really can’t get into her story because there will be spoilers.

I was thrilled that Mizzi made an appearance in the book and  I was even more thrilled that Asantia was featured more in this book. There was a secret that was revealed in the book that I actually guessed in book 1. Not going to say what but I wasn’t surprised when the connection was made.

The end of the book was not what I expected….at all. I liked it because it was different and I usually don’t see these types of endings. It did leave the series open for a book 3, too. Which I can’t wait to read if/when it happens.

How many stars will I give Return to Lan Darr: 4

Why: I really enjoyed reading this book. From the unforgettable characters to the engaging plotlines, this is a book that any tween, teen or adult would love to read.

One thought on “Return to Lan Darr (Heroes of Distant Planet: Book 2) by Anderson Atlas”