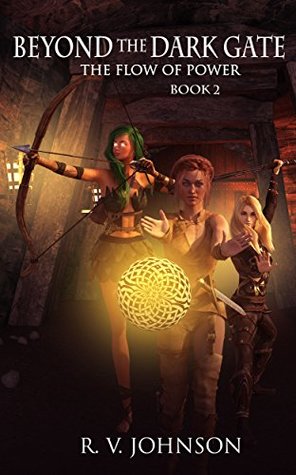 Title: Beyond The Dark Gate

Series: The Flow of Power

Where you can find Beyond The Dark Gate: Amazon

The Flow of Power Rages On.

Faced with a choice that could save or destroy those Crystalyn loves, madness looms at the edge of her broken mind. Jade’s aura-reading ability develops, evolving beyond wholesome. Garn’s enslavement ends, something far worse taking its place.

Determined to destroy the foundation of power on Astura, the hooded man’s intrigues wreak havoc on the land.

A brilliant Dark robe executes a bold plan that, if successful, will unleash a great malevolence.

Enduring in the shadows for millennia, a new influence emerges. Gaining strength from others, its alien cunning has subjugated entire worlds with none the wiser.

With peril lurking everywhere, Crystalyn’s great and brittle strength becomes ever more imperative to her friends’ and families’ welfare…but only if she can hold up.

The epic saga continues in this action-packed second novel of The Flow of Power series.

There are times where I dread reading series, mainly series where I absolutely loved the first book. My expectations are usually too high and it’s a let down when the 2nd book isn’t as good as the first one. Fortunately for Beyond The Dark Gate, my expectations were beyond met and I was most definitely not let down.

Beyond The Dark Gate starts off almost immediately after Crystalyn, Jade and company returned to Astura through the gate in Ruena Day’s office. The reason why they decided to back to Astura, to find and defeat Darwin Darkwing, a powerful Dark User and one-time love interest of Crystalyn.

Jade seemed to get the short end of the stick in this book, again. Not only is she separated from Crystalyn fairly early in the book, but she is also taken over by the entity called The One Mind and is completely under its power. It takes over people by inhabiting their minds and forcing them to do its will. Jade is able to keep a part of her mind separate from The One Mind but she is aware of everything that it is doing. For some reason, it reminded me of Invasion of the Body Snatchers (the old cult classic). Luckily, for her, before she got possessed, she actually met up with Garn. I say luckily because It listens to him.

Crystalyn, however, keeps getting sucked into battle after battle….on top of trying to locate her missing sister. I don’t know how she did it because I would have been overcome with exhaustion. Plus, she kept getting injured and bouncing back. I couldn’t believe it when she was up and walking after getting her head split open by Brother Craven. I did like seeing how she was a very strong female leader who didn’t take anything from anyone. Her anger issue was still there, from the last book, but she seemed to be better at controlling it and channeling it into her symbols.

The secondary characters were what made the book. From Broth, Crystalyn’s bondmate, to 8 foot tall Lore Rayna who was half tree and had a dress that was made out of leaves to Atoi, the Dark Child who has allied herself with Crystalyn for reason’s only known to herself to Hastel, the one-eyed warrior, and many others. They wove a rich backdrop and played vital roles in the story for both Jade and Crystalyn.

I think I was very surprised when Sureen, Garn’s wife and Jade’s and Crystalyn’s mother, showed up not only alive but as a User. There were hints in the first book but I wasn’t ready for her appearance in this book. Neither was Crystalyn. The talk that they had about her disappearance was exactly the one I would have had if my mother had disappeared on me years ago.

There were some unexpected deaths’ in the book that made me very sad and a bit surprised. I was not ready for this character’s death and I think I might have let a few curse words slip out.

The end of the book was fantastic and oh my, what an epic battle.

How many stars will I give Beyond the Sapphire Gate: 4

Why: 3 Dimensional characters and a plotline that kept my attention.

Why: Violence and talk of sexual situations (just talk, nothing is described)

One thought on “Beyond The Dark Gate (The Flow of Power: Book 2) by R.V. Johnson”