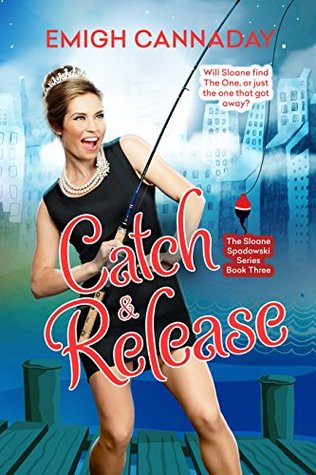 Where you can find Catch & Release: Amazon

Jaded from years of playing catch and release when it comes to men, Sloane is ready to land one for keeps. When she winds up stranded at the Barbie dream house deep in the heart of Texas, she sees it as a chance to cast her net on true love. What begins as a not-so-innocent play date quickly turns into a summer packed full of adventure and romance. Not wanting to rock the boat, Sloane keeps her deeper feelings a secret until the right moment comes along. But living in a world of make-believe can’t last forever. As the summer comes to an end she has to decide if she’s going to hang on and fight or cut the line.

* The Sloane Spadowski series is a whimsical, rowdy, dirty blend of Contemporary Romance and Romantic Comedy with occasional adult language and adults behaving badly. This is the third and final installment of a complete series.

Catch & Release was everything that I hoped it would be and then some. But what I didn’t expect was the emotional rollercoaster I went on reading this book. I went from joy to grief within pages of each other. Of course, we can’t forget falling in and out of love.

I enjoyed seeing Sloane growing up in this book. What I mean growing up, she matured big time. She went from being a self-centered girl who changed jobs and men as often as she changed her underwear to a woman who realized that she couldn’t keep that lifestyle going and needed to make personal and lifestyle changes. Of course, though, this happens all after her trip to Texas. Before that, I could see her changing.

I am not going to come out and say that I was unhappy that she and Andy broke up. They were not happy together. I do think that maybe Sloane should have broken it off sooner than later. I mean, Barbie did ask her to break it off as soon as they had sex but she couldn’t do it.

The whole showdown at Barbie’s Dreamhouse was heartbreaking. I actually felt for Andy and I didn’t blame him one bit for him freaking out on both Sloane and Barbie. They both deserved it. I mean they did have sex while Sloane was still in a relationship with Andy. What shocked me was the way he found out: Sloane talks in her sleep. Talk about ouch!!

The sex between Barbie and Sloane was hot, as usual. But what got me was the scene in the pool, after Andy left and both Sloane and Barbie were still reeling from Andy’s speech. OMG, the feels and the song that was used to set it. Wicked Game by Chris Isaak. Love that song!!

I am going to miss this series and reading about Sloane’s shenanigans. The book couldn’t have ended on a better note (once I got over my shock) and I am hoping that Sloane, Andy, and Barbie make an appearance in another book or a short story.

How many stars will I give Catch & Release: 4

Why: This was a great ending to a great series. Sloane, Barbie, and Andy grew on me. The plot was great and the twist at the end of the book did shock me.

One thought on “Catch & Release (The Sloane Spadowski Series: Book 3) by Emigh Cannaday”