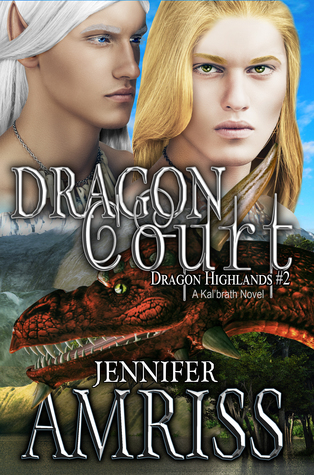 Where you can find Dragon Court: Amazon

The Dragon King Returns.
But his reign may be at an end.

Xastrian and Velithor return to the Dragon Highlands expecting a celebratory welcome. Instead, his assassin is still at large, and the court is in an uproar. Xastrian may lose his right to rule, if not his life.

A kingdom at war.

A long-exiled warrior race is invading through a rip in the veil between worlds, and the court lays the fault at Xastrian’s feet. Faced with this new threat, the court wants to see a new elf on the throne.

Velithor has kept away from crowds all his life, but his love for Xastrian is stronger. But when his father-in-law raises him as the new Dragon King, serving beside Xastrian, it might be too much. Especially when an old enemy emerges, this time with Velithor in his sights.

I can’t tell you guys how excited I was to read this book. I had read book 1 (Mage of Legend) and fell in love with Xastrian (Xastri) and Velithor (Veli). So when Jennifer was sending out the ARC’s for Dragon Court, I pounced on it. It exceeded my expectations and I was literally glued to the page.

The romance between Xastrian and Velithor was what made the book.  Their love for each other couldn’t be broken. Not by anyone or anything. I loved reading a book where such a love was put on display. Sure, the relationship was majorly tested, but they overcame it by talking about their issues (gasp). Amazing that fictional characters can do what real life people don’t do….talk about things.

I liked how Xastrian’s grandfather and father were portrayed in the book. I feel into Instalove with his grandfather, Va’asdrian. He was so accepting of Velithor and went out of his way to make sure that Velithor was comfortable. Now, Xastrian’s father, Mivikial, was a jerk when he first met Velithor and to be honest, I didn’t care for him. But the more he showed up in the story, the more he grew on me and I will say, that after a certain scene…..I loved him. If you want to know what that scene is, read the book.

The invasion storyline was very interesting because the invaders were coming through a rift caused by Xastri in the first book. I did wish that we were taken to that world by the author. That way I could have understood how they had magic nulling powers. Maybe another book because I find it is a race that I am fascinated with.

The Red Dragon storyline was very interesting. I say that because of what is revealed when Veli is taken there. I’m not going to go into it much because doing that will kinda ruin a part of the book. I will just leave it at this: Red Dragons are not what you think they are. Read the book to find out more about them.

Now, the assassin storyline. I will say that I did figure out part of it pretty early in the book. I figured it out right before Asseisal called for Xastri to be dethroned for his actions. I was a little shocked, though, at what happened afterward. Actually, a little shocked doesn’t cover what I felt. Again, something that I don’t want to show because it is a big part of the latter half of the book. You really need to read the book to find out what I am talking about.

I have to mention Velithor’s father. He was such an idiot (keeping that Amazon PC) and I was honestly surprised that Xastrian didn’t beat him down. But, when Velithor was stabbed, his father was there for him and took over his healing. It was during that healing that Velithor’s father reveals why he said was he said and expressed remorse for his past and present behavior. He also admitted a ton of guilt for the way Velithor was conceived and the miscarriages that followed his wife’s blood ritual. I was glad to see that Velithor and his father were working things out.

The sex scenes were hot. The last sex scene, though, speared my heart. Talk about an awesome way to heal and it made me love Veli and Xastri even more.

The end of the book had a twist in it that I didn’t see coming. Nothing was mentioned up until it was revealed and I was pretty shocked. But what also shocked me was what happened afterward. But, it was very fitting for all the mischief and mayhem that was caused in the book. There is a hint of a HEA in the book too….which makes me very happy.

How many stars will I give Dragon Court: 5

Why: This book exceeded everything I hoped for it. Amazing, well-written characters, storylines that were intense and kept me on my toes and a love that couldn’t be kept on the pages.

Why: Violence, sex, and language. There are some scenes that could easily trigger people so I would read with caution