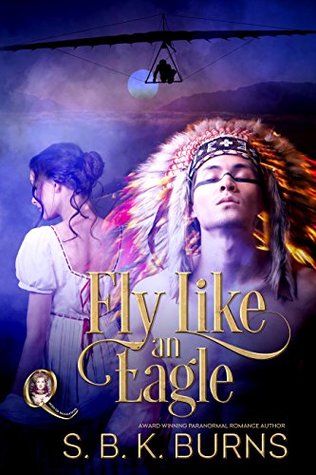 It’s 1824 Philadelphia at the opening of the Franklin Institute of Science, and one of its founders, Samantha’s father, wants her to marry his business partner, a much older man, to keep their war industry dealings secret.

Looking for a way out of the arranged marriage, tomboy Sam finds it in Eagle, the half-Native American son of the man she is to marry.

Eagle brings Samantha into his spiritual world, his bimijiwan, in order that she might stop their father’s preparations for an ironclad Civil War at sea. To do this, Sam might have to convince Benjamin Franklin to abandon his kite experiment.

What attracted me to Fly Like an Eagle was the cover. I absolutely loved it. You have the heroine with her back to the hero, who is in full Native American attire. Above them, is a hang glider (which does have a major part in the story) and next to the title is a small picture of who I am going to assume is Electress Sophie. Normally I really don’t pay attention to the cover’s but this one caught my eye. I mean look at it. Migizi is almost defiant looking, which goes 100% with his character in the story. Samantha is trying to act demure but you can see her looking at Migizi out of the corner of her eye….like she is almost afraid to look him. If I saw this in the store, with this cover, I would be buying it.

The science fiction element of the book was fantastic. I will admit, that during the time travel scenes (where they used the flow to runtime machines), I did have visions of Doctor Who popping up. But that aside, if I were to picture time travel, this makes the most sense to me. The reason it made sense to me….well because it was found (note that I said found not founded) by a mathematician. I also liked that there were people who could travel the Flow naturally. Migizi was one of them and it went with his native American roots. Except it wasn’t called the Flow, it was called bimijiwan and it was revered by Migizi’s Delaware clan.

I really liked the steampunk elements of the book too. I think I would have acted like Samantha if I had to go to Piscatawnia. I mean, you have people dressed like you have never seen them dressed before (corsets worn over dresses, watch fobs as accessories) and then you have all the machines flying around. It was awesomely wonderful. I also like how certain famous missing people showed up in the book and how it was explained how they got there.

The romance part of the book was pretty standard. I didn’t like, though, that there was a love triangle, of sorts, between Migizi, Samantha, and John (Migizi’s father). To be honest, it creeped me out….even though it was explained that the marriage was to be in name only. I do think that maybe it should have been just Migizi and Samantha from the get-go. Other than that, I thought the love story between Samantha and Migizi was sweet. The sex, which there was a lot of…both were insatiable, was pretty hot too.

I liked the appearances of historical figures in the book. Ben Franklin definitely gave the last part of the book that “oomph” it needed and he was hilarious to boot. The whole scene where he was talking to Samantha’s father and Migizi’s father and giving advice about the ladies. Oh lordy…I was dying laughing.

Overall, I really enjoyed reading the book but you do need to read book 1 first.

How many stars will I give Fly Like an Eagle: 4

Why: I enjoyed reading the book. From the cover to the characters, I enjoyed everything about it. There were some parts that bothered me (mainly the father/son love triangle) but they were resolved in a way that made me very happy for everyone involved.

One thought on “Fly Like An Eagle by (Ages of Invention: Book 2) by S.B.K. Burns”