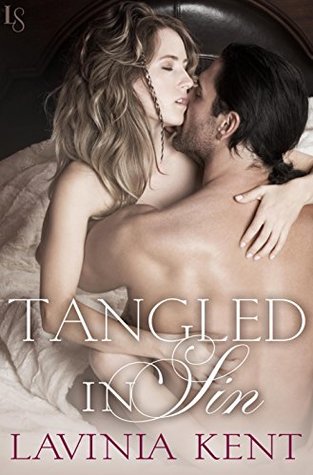 An innocent young woman flirts with scandal and becomes the mistress of her own forbidden desires in this stimulating Regency romance from the author of Mastering the Marquess.

Lady Cynthia Westhope can’t believe the shocking rumor is true. Her childhood friend, the daughter of a duke no less, has become the madam of London’s most exclusive and notorious brothel. Though she’s known as “Sin,” Cynthia is scandalized—and surprisingly curious. Just picturing the whips, the chains, the uncontrollable urges men gratify behind closed doors sends a jolt of electricity through her body. Still, Sin can’t imagine taking part in such games—until she’s snatched off the street during a raging storm and swept away to a remote cottage.

When James Winters encounters the comely virgin, he assumes she’s one of Madame Blanche’s fresh new beauties, especially after Sin pulses in ecstasy as he ravishes her. Then he discovers that she’s Lord Westhope’s virgin daughter . . . or was. Now they will both be compromised unless James devises a plan to save Sin from disgrace. Before long, they’re entangled in a web of tempting propositions, family secrets, and sensual intrigue—and bound together so tightly that James never wants to let go.

While this is the 5th book in a series, you can definitely read this as a standalone book. I am not a big fan of picking up a book mid-series because usually I am left confused about past relationships. Not with this book, though. There were references to Ruby but nothing was really gotten into. Just that she turned the brothel over to Jazz after training her. I really enjoyed that, to be honest. It let me focus on Sin and James’s romance without fearing that Ruby would return. Also, the other characters from the other books were not mentioned at all. Again something I liked. They stayed in their own books….lol.

I thought Sin was great and very forward thinking for her time. She didn’t freak out when she was kidnapped, kinda freaked out when James took her virginity and then grasped her sexuality by the horns. It was so refreshing to read a Regency-era character who didn’t freak out when seeing a penis for the first time and who took the first step to start what would be the world’s hottest sponge bath in the history of any book that I read. But she was also super stubborn. There were some scenes where I kinda wanted to shake her and say “Just accept that you are going to marry him. Stop fighting it” because you know that is how the book is going to end.

James was kinda a tool at the beginning of the book. Who demands that their sister leaves her newborn daughter and then tries to kidnap her but instead gets her best friend (that he knows), thinks that it is one of her “girls” and then proceeds to have sex with until he realizes that she was a virgin. He is. But he does more than makeup for it and turns into a pretty good guy. I did think that maybe he wanted to marry Sin so he could have intercourse with her (actually intercourse) but he proved to me that he did love her. Read the book to find out how!!

The end of the book was great but I was left wondering about Jazz and hoping that book 6 if there is a book 6, would feature her and let her have her own happy ending.

How many stars will I give Tangled in Sin: 4

Why: Ok, I am going to say it here. This is not a book for prudes or those who get easily offended over things (like it being an erotica set in Regency England). This is one hot, hot, hot book with explosive sex scenes and two people who were made for each other. I devoured this book, literally reading it within a day. Couldn’t get enough of it and I am going to read that other books in the series.

Will I recommend to family and friends: Yes but with a warning about the sex scenes

Why: Explicit sex scenes, language, and some mild violence

One thought on “Tangled in Sin (Bound and Determined: Book 5) by Lavinia Kent”