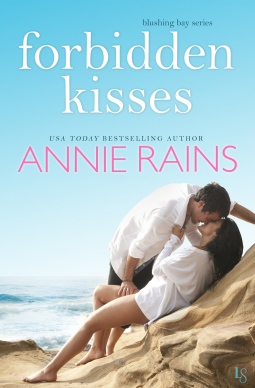 For years, Jack Sawyer’s family has been running their upscale seafood business like a finely tuned machine. But every machine breaks down eventually, and suddenly Jack needs a new office manager, a new kayak launch, and a new lease on life. Then Grace Donner shows up again. She’s smart, motivated, and perfect for the manager position, but if she’s anything like her mom, she can’t be trusted. And Jack has never been able to trust himself around Grace.

Grace hasn’t seen her former stepbrothers since their parents’ messy divorce, but she never forgot them—especially Jack. She misses being part of the big rambunctious Sawyer clan, and if there’s an opportunity to set things right, she means to do it. But she can’t ignore Jack’s irresistibly kissable lips or the searing way he looks at her when he thinks she’s not looking. Their chemistry is more explosive than ever. And if the Sawyers can forgive and forget, anything is possible.

I really liked Grace. She put up with a lot of crap from her mother growing up but was still there for her when her mother was diagnosed with Parkinson’s Disease. To say her mother wasn’t June Cleaver was an understatement. She also took a lot of crap from her old boss, the owner of a bar and ended up quitting when she couldn’t deal with his sexual advances anymore. So that leaves her without a job. Which brings her back into Jack’s world again.

I liked Jack. He had never forgotten Grace or his attraction to her but his rage at her mother’s actions kept him from talking to her. Not to mention that Grace went out of her way to avoid them because of what her mother did. So, he was surprised when Grace overheard him giving a job interview (not know it was him) and approached him for the job. He was in a bind, didn’t like the other applicants and hired her…without his father or brothers knowing. So, it wasn’t surprising when his brothers acted very negatively to Grace being there. What surprised me was his father’s reaction and I wanted to hug him.

The other storylines of Tristan and Tammy were very sad. I thought it was great when Jack stepped up and went to bat for Tristan. He gave him a job when most people wouldn’t and he stepped in when most people didn’t (read the book to find out what the situation was). Tammy’s storyline was sad but at the same time, I wanted to smack her. She laid so much on Grace about her past regrets and making things right before she died that Grace thought the only way to heal the rift between their families would be to buy back the boat Tammy sold.

I also could totally understand where Jack was coming from with his hatred of Tammy. I mean, she did sell off all of his mother’s belongings. I did wonder, at points in the book, if he would find it in himself to forgive Tammy (read the book if you want to find out).

The sex scenes between Grace and Jack were very hot and a little naughty (remember stepbrother/stepsister). The pages did burn up when they got into bed with each other and the pages burned up even when they weren’t sleeping together.

The end of the book was pretty good. Be ready to shed a tear or two and definitely be ready for the HEA during the epilog. I love it when authors to let the readers know what is going on after the story ends. Made me smile!!

How many stars will I give Forbidden Kisses: 4

Why: Enjoyable, relatable characters, hot sex, and a great plotline. I read this book in one day, it totally captivated me. I can’t wait until book 2 comes out!!

Why: Sex and some mild language