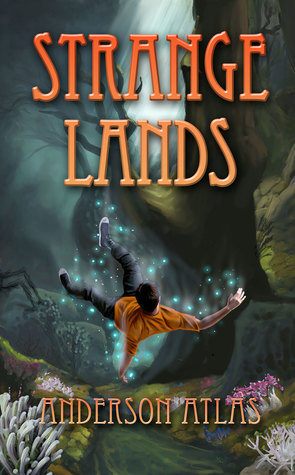 Ripped from his wheelchair by a massive flash flood, Allan drags himself through the dense forest only to find himself surrounded by strange and ruthless creatures who are not from Earth. Allan can’t run away and has no means to defend himself. Instinct overcomes his terror and his cleverness blossoms, which is all he needs to survive the dark jungles, poisonous plants, Shadic hunters and the vile slave trader Killian Crow.

Follow Allan’s path of self-discovery, and watch him take back what he’s lost. Surviving the Improbable Quest is a spine-tingling adventure, with exciting twists & turns. A perfect and inspiring read for 10 and up.

I have found myself reviewing a lot of middle-grade books lately. Which is a good thing because I have two children that are within the age range and I am always on the lookout for books that they would like. After reading Strange Lands, I think this would be a book that my 10-year-old son would like.

The plot itself is pretty straightforward. Allan, a boy in 8th grade, was in a horrific car accident that not only paralyzed him but took the lives of his parents. What made the accident even more tragic, well at least to me, was that Allan had been disqualified from a swim meet, after winning it, because of failing a math test and his parents come to find out that he is missing work in other areas of school as well. So, when the crash occurred, his mother and father were lecturing him. I could see why he was rendered mute as well. Poor thing was living with the guilt that he caused the car accident.

I don’t know if I would class Allan as likable at first. He had a lot of issues due to the accident and was definitely taking it out on his uncle. I was glad when Rubic forced Allan to go on the fishing trip. It took Allan out of his comfort zone and got Allan somewhat out of his funk. Of course, something goes wrong and that is where the book took off.

Rubic and Allan were caught in a surprise flash flood when fishing in the creek. Rubic snatches Allan out of his wheelchair and runs for it and almost makes it. But a boulder knocks Rubic out and leaves Allan helpless in the mud beside him. After damming up the water, so Rubic doesn’t drown, Allan starts crawling to get help. Along the way, he crawls through a field of flowers and ends up somewhere else and that is the start of his adventure.

What I liked is that the author didn’t downplay Allan’s disability at all. Allan wasn’t miraculously cured of being paralyzed (but he did get mechanical legs to help him out with part of his quest). Allan learned to work with his disability when he was in Lan Darr. What I also liked is that his mental issues were addressed too. The speech given by Mizzi about the accident touched me and brought me to tears.

The storyline with Rubic was interesting too. I saw him grow, even that day, from the uncle who was forced to take care of his nephew to a parent searching for his child. He was willing to do anything to get Allan back…even if that meant getting even more hurt.

I will say that both storylines were brought together beautifully. While Asantia’s identity was kept under wraps, it still surprised me about who her mother was. How it was revealed was a huge surprise too. While not a cliffhanger, the ending did leave it open for another book.

How many stars will I give Strange Lands: 4

Why: This is a book that I could see both of my kids reading. The overall message was fantastic, as was Allan and Rubic transformations. I enjoyed reading it and I am an adult.

Why: A middle-grade book for kids over the age of 10. There are some mild violence and some creepy characters but nothing that wouldn’t give a kid nightmares.