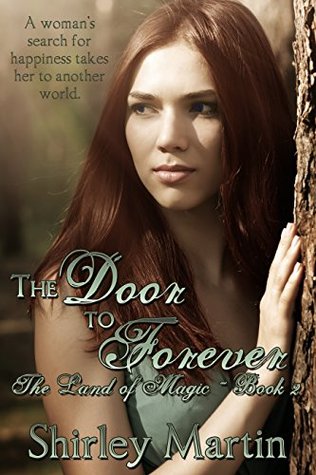 Title: The Door To Forever

Series: The Land of Magic

The Door To Forever – Book 2

As a teenager, Kaylee suffered an attempted sexual assault. Now a woman, she remains fearful of men. She vows she’ll avoid the opposite sex.

When her dreams take her to an alternate world, a land of peace and harmony, she wishes she could stay in this world. There, a psychic with a crystal ball tells her she will find love, for he sees a man reaching out to her. He tells her she must learn to trust men.

Kaylee has no idea who this man is, and she knows she can never put her faith in a man. The memory from her teenage years is too painful.

Then she meets Logan. Will he be the man to change her mind? World-weary and cynical, Logan declares a respite from women. When he meets Kaylee, he knows she is a woman like no other. His head tells him to stay away from her, but his heart refuses to listen.

I really didn’t know what to expect when I started reading The Door To Forever. I honestly, don’t think that the blurb does this book justice at all. There is more meat to the story than what is described. This is one instance that I would say, don’t go by what the synopsis says….read the book.

Kaylee did have some major issues at the beginning of the book. She was deeply scarred from an attempted rape at 13 and then another attempted sexual assault when she was in college. After those experiences, she didn’t trust men. Which I don’t blame her. But then she starts dreaming of a land that she can only get through by opening a door in a dark, dismal forest. The land is called Vestoria and it is the home of elves. On her first journey there, she meets an elf called Nemek. After a few visits, she tells Nemek about her tragic past and he is appalled that men are allowed to treat women that way in her society and not be punished. It was at this point that I put the book down and applauded the author for putting this in because it is the truth. Sexual assault and attempted sexual assault are not like other crimes and only a small handful go to trial.

Vestoria is a land of peace and tranquility. Just reading about it made me wish that Vestoria was real. Violence towards women (or anyone really) was not tolerated and was swiftly dealt with. But it was a backward society. Women were expected to stay at home until they found their lifemate (ie got married). But it called to Kaylee (like me). After a few visits, she was granted visitation with the king and he told her that she needs to heal. To learn to trust men again and to find love.

I think Logan was the right person for her. He was the 1/2 owner of the restaurant she worked at and he taught English at the local university. He also came from money but he didn’t rely on his parents to pay his way in life. He was attracted to Kaylee but he didn’t want to go too fast because he sensed that she had been hurt in the past. He was the one to find out who was behind all of Kaylee’s mishaps at work and he was the one who stuck up for her when his friend wanted to fire her. Which he should have. I mean she didn’t come into work for a few days.

The romance between Kaylee and Logan was very sweet. To be honest, I was surprised when certain events happened because, honestly, I didn’t think it was going to happen. I really thought that Kaylee was going to end up with Nemek or someone from Vestoria.

The bad guys in the book, Gitta and Drummond, kinda annoyed me. Drummond seemed like he was a tool and Gitta, well she was power-hungry and didn’t double-check to see if the people she killed were really dead. Because she was surprised when she met up with her arch nemesis, Zurina, a witch from the first book. I was also a tad disappointed at how easily Gitta was defeated. But, Drummond escaped and I know he will make an appearance in the next book.

I liked the ending and loved how everyone was so happy. Normally I am a poop and I don’t like super happy endings but I loved this one!!

How many stars will I give The Door to Forever: 4

Why: I really liked this book. This is one of those books that you could read at the pool or a beach. The plot wasn’t too involved and the characters likable. While rape and attempted rape are mentioned, it wasn’t thrown in your face the entire book. It was part of who Kaylee was and the author didn’t dwell on it.

Why: Some violence and both of Kaylee’s attempted sexual assaults were kinda graphic. There is one sex scene, at the end of the book, but it isn’t very detailed.

One thought on “The Door to Forever (The Land of Magic: Book 2) by Shirley Martin”