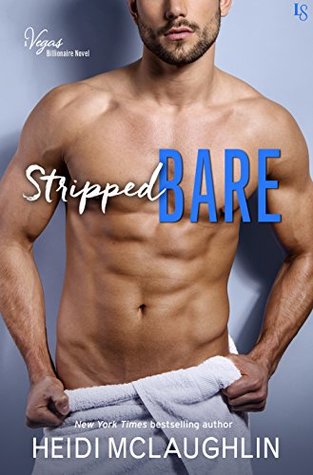 Can be read out-of-order from series: Yes, 1st book in series

In this sinfully sexy Las Vegas romance from bestselling author Heidi McLaughlin, a man who has it all reunites with a woman who takes it all off.

Living in Sin City, Finn McCormick is no stranger to one-night stands, but the last person he expects to find losing big on the casino floor is a former high school fling. Even though Macey Webster’s clearly down on her luck, she’s still a knockout, and she’s dressed like a stripper—because she is one. Drunk off an unfamiliar cocktail of lust, pity, and compassion, Finn offers to pay Macey’s debts if she cuddles up to him around town . . . and does whatever he wants between the sheets.

Macey came to Vegas for one reason only: money. She’s got a young daughter to support, and the tips really are bigger in Vegas. But when she blows her earnings on blackjack, her guardian angel is the rich boy who once stole her heart and never called her back. Although Macey would love to turn the tables on Finn, she can’t afford to refuse his proposition—and soon she’s enjoying herself much more than she cares to admit. Macey’s used to bare her flesh, but baring her soul will take far more courage.

Instead of getting two people just banging each other for the entire book and then “falling in love”, there was a story. And the love part of the story, which mainly took part over two weeks, was drawn out. Sure there was sex and sure it was mind-blowing but that wasn’t the whole story.

My heart did break for Macey during the book. She really got the short end of the stick in life. She got pregnant at 17 after a one-night stand at a party, dropped out of high school to have her daughter and restored to stripping at night and waiting tables during the day to help pay the rent and keep a roof over her, her mother’s and her daughter’s head. She felt stuck because she couldn’t make enough money to move out of her mother’s apartment and she was upset because while she was working, her mother took care of Morgan, her daughter. Well if you called getting drunk and having strange men over all the time watching her. Macey feels awful because she has told Morgan to hide in the closet if strange men came over and that is not a way for a child to live. She also lives in fear that Children’s Services will eventually show up at her door and take Morgan away.

So, when she is told about how stripping in Las Vegas is so much better than stripping in the town she lives in, Macey decides to jump at the chance. She is desperate to get Morgan out of that living situation and feels that she has no other option but to go strip in Las Vegas. What a hard situation to be in and then to find out that when she went to the paternal grandmother for help, only to have the door slammed in her face, made it unbearable.

Finn, however, was a jerk in the beginning. When he saw Macey playing blackjack, he not only recognizes her as someone from his hometown but he tells Lamarr, his best friend, that he thinks he slept with her back before he went away to college and he pegs her as a stripper and maybe an escort. He then gets punched by Macey as she is leaving the casino in tears because she lost all the money that she earned. When he follows her, he propositions her. One week with him, doing what ever he wants when he wants for $30,000.

I found it funny that he assumed that Morgan was either Macey’s boyfriend or pimp. And I found it very ironic that Lamarr knew who Morgan was and if Finn had just asked, he would have known sooner and wouldn’t have put Macey through the wringer about it. I have to give her credit, though, she put up with his crap until the end and only because she needed the money.

Macey did get on my nerves, though, when she was dealing with Brandy. For such a strong woman, she was pretty weak about confronting Brandy and calling her out. She never thought to go to Finn and see if he actually said or did the things that Brandy said he did. She would just run back to the penthouse and cry about it until he came back and he explained things. Uggh.

I will say that the sex was very hot. Off the pages hot. I also liked that safe sex (because you know, I have nothing better to do with my life than worry about fictional characters sex lives) was used until almost the end. But by then, a lot of things had changed between Macey and Finn.

Like I said above, I thought the storyline was pretty reminiscent of Pretty Woman….except that Macey wasn’t a hooker, she was a stripper and she had a kid.

The storylines were wrapped up pretty good. I loved that Brandy got what was coming to her. I was in bed by the time I read that scene and I did a double fist pump. She was put in her place and then some!!!

I did figure out who Morgan’s father was by the middle of the book. I mean, the author didn’t try to hide it or throw red herrings out. So when it was revealed who it was, I was like “Yes” and “What’s next”.

The end of the book was a pretty standard HEA and the author made me jealous with the vacation location….lol.

How many stars will I give Stripped Bare: 4

Why: This was a hot read with a good but predictable plot. What I really liked is how strong Macey was. I also did like Finn towards the end of the book but I did think he was a jerk at the beginning.

Will I recommend to family and friends: Yes but with a warning about explicit sex.

Why: Explicit sex and language