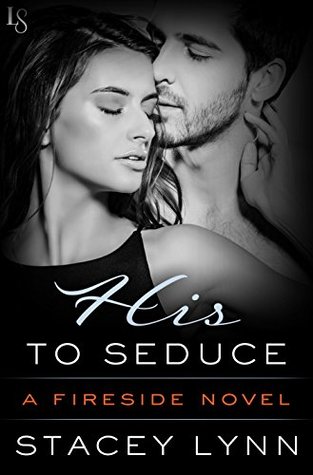 Title: His to Seduce

His to Cherish – Book 3 (review here)

An honorable man who’s lost his way . . . A career woman who hides behind her button-up suits . . . Unexpected romance is the specialty at the Fireside Grill as Stacey Lynn’s captivating series comes full circle.

Becoming an ER doctor had been David McGregor’s mission ever since he could remember. But after tragedy strikes at his hospital in Chicago, David runs away from the guilt—all the way back to Latham Hills, Michigan, where he takes a job tending bar at his childhood friend’s restaurant. That’s how he meets Camden Reed, and the way Camden refuses to give him the time of day should be a turnoff. Instead, he’s drawn to her tough, tightly wound exterior, and soon David realizes that he has a new mission: to see her tightly wound beneath him.

Camden’s fighting tooth and nail to resist the desire she feels for David. Growing up dirt-poor, raised by a single mother, she worked twice as hard to get where she is today, and she doesn’t have any patience for the kind of guy who’d give up a decent paycheck to sling drinks. But when the sexual tension finally combusts between the sheets, Camden discovers that people aren’t always what they seem. As David pushes her past her limits, Camden begins to loosen up—and to trust that, when she falls, there will be someone waiting to catch her.

What a great ending to a great series. Now granted, I only read two books. But the books that I read blew me off my feet. His to Seduce starts off as your typical screw fest. I mean, Camden and David had no holds bar sex in a closet at their friend’s wedding reception in Jamaica and then spend the rest of the vacation doing the same. But, Cam’s tragic past raises its head and David’s huge secret (which was only a secret to Cam….not everyone else) is revealed in a very shocking way.

I will admit, Camden annoyed me. She came across as a bit snobby (telling Trina that she would never date bartenders) and very insecure. But, the more I read the book and the more she reveals about herself, I started to get why she was the way she was and it broke my heart. No child should ever have to go through what she did and all I have to say is that the drunk neighbor was my hero in that situation. It also explained her over the top reaction to David’s secret.

David was a saint. His only fault was that he didn’t tell Cam that he was a Dr or that he was über rich. I think he dealt with Cam and her insecurities amazingly well and I pegged him being in love with her when she told him her big secret and he gave her space. He also didn’t take her crap, which I liked also. But he wasn’t a saint. To be honest, I felt that he was dealing with a form of PTSD after being an ER Dr in Detroit. Just saying, it sounded like it to me. I also liked that he pushed Cam to face her fears and embrace them. I swear, if he was real, I would be all over him like white on rice….lmao.

The sex was beyond hot. They had closet sex, pool sex, ocean sex, and bed sex. I loved Cam’s reaction to the ocean sex. Honestly, I would have thought the same thing. Saltwater wouldn’t make a good lube….lol.

The end of the book, along with the epilog, was awesome!! I just wish that the other characters from the other book made an appearance so we could have seen what was going on in their lives.

How many stars will I give His to Seduce: 4

Why: A great book with hot sex and some memorable characters. I will admit that Cam annoyed me but that was eclipsed by her and David’s love story

3 thoughts on “His to Seduce (Fireside: Book 4) by Stacey Lynn”