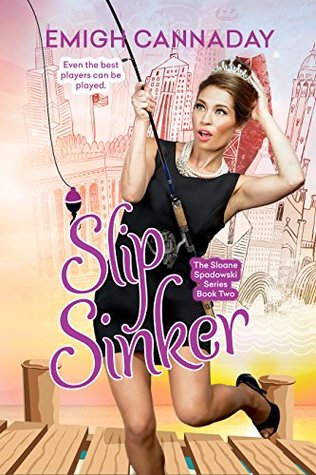 After meeting Andy’s best friend, Sloane begins to rethink her strategy on how to reel in her prize. Not only is Barbie a matchmaker with a perfect track record, but the tall, tan, gorgeous blonde clearly adores Andy and isn’t about to give his new girlfriend the green light without conducting a thorough investigation. Claiming to have Andy’s best interest in mind, Barbie puts Sloane through an intense cross-examination to get to know her better and learn what she wants most out of life. When Barbie’s ruling is announced, Sloane’s in too deep with both of them to realize she’s in way over her head.

* The Sloane Spadowski series is a whimsical, rowdy, dirty blend of Contemporary Romance and Romantic Comedy, with occasional adult language and adults behaving badly. This is the second installment of a complete series.

I don’t think I have laughed as hard at a book than I did with this one. I was in bed, reading, and I was laughing so hard that I had tears coming down my face and my SO was asking me “You alright? What’s so funny?”. The Brazilian Wax scene was pure gold. I have never had one done and guess what, I will never have one done after reading Sloane’s misadventure with that. Right up there is when Sloane, Barbie, and Andy are at the gay bar and Barbie/Andy dance to “Barbie World” and then Barbie dances to “Ride a Cowboy (Save a Horse)”. I like both songs but I will never get the mental image of Barbie twerking to Barbie World out of my head….lol.

I am going to admit, I was wrong about my misconception with Barbie at the end of Jerk Bait. So wrong about him and I don’t like being wrong. But he seemed like such a good friend and his matchmaking abilities did score Jack a date (and possibly a boyfriend) and he seemed to really like Sloane. His Texan accent, the way he talked and his ridiculous nicknames (Sloaney Baloney, Handy Andy (and am I the only one that internally corrected that to Handy Manny….lol), Kimmy the C*nt) were fabulous. He was a self-described hound with a “disability” that gets him more hunnies than he can handle (his words…lol). I loved him and he is a fictional character…haha.

Sloane was still her bad self in this book but I could see her chafing at being in a relationship with Andy. Christmas was a huge question mark in my mind when she got weird on the gift he gave her. I mean, she got a pearl necklace and she freaked out. The Valentine’s Day fiasco kinda cinched it but I still had doubt. But Saint Patty’s Day, that cinched it. Sloane, in her own words, went through men and jobs like tissues, so I shouldn’t have been too surprised when she started to get itchy. But the person who she moved onto (while still being with Andy) was a huge surprise to me.

Let’s just say that the rest of the book was filled with beyond hot sex. Burning hot sex with this person. Andy, well he didn’t have burning hot sex with Sloane. He was blander and more vanilla. Sloane’s partner was not vanilla. Oh no, he wasn’t….lol.

The end of the book had a sneaky cliffhanger and made me wonder about a few things. The main thing is would Sloane stay with Andy or would she go with the other guy. I also want to know if she was getting a puppy (read the book) and you know what, all this pregnancy talk makes me think that maybe, just maybe, Sloane might get knocked up. Too much stress on babies and how happy she would be without them.

How many stars will I give Slip Sinker: 5

Why: I actually read this book in one night. I was glued to the story while laughing my hiney off. The characters were unforgettable and they all grew on me.