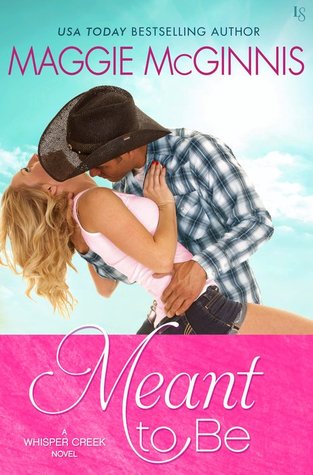 Title: Meant to Be

Once Upon a Cowboy – Book 3

Hailed by Christie Craig as “a witty new voice in contemporary romance,” Maggie McGinnis takes readers back to Montana’s sexiest dude ranch, where anyone can start over, and falling in love is just a beautiful twist of fate.

At twenty-eight, Shelby Quinn’s already a has-been. Scooped off a country stage at sixteen and remolded into glittery pop princess Tara Gibson, she toured the country for a decade, playing to sold-out stadiums while slowly losing her soul. Now her sales are waning, and when her beloved father dies in a fiery plane crash, she finally comes apart at the seams. Alone and brokenhearted, she hides away at Whisper Creek Ranch, never expecting to meet a man who understands her in a way no one else ever has.

Cooper Davis was one of Boston’s top detectives—until a bogus investigation cost him his badge, his family, and almost his life. Now he’s wrangling horses and guests at Whisper Creek Ranch while keeping one eye firmly on a super-secret VIP holed up in a private cabin—a beautiful, soulful singer who knows what it’s like to lose everything. Cooper and Shelby both have ample reason to guard their hearts. But if they can learn to trust each other, something magical awaits them under the big skies and bright stars.

Meant to Be starts off on such a sad note. Shelby is attending the funeral of her father, a country singer legend who died in a horrific plane crash. She is beyond devastated but is not allowed to show it. When she complains about it, her handler (aka her PA) basically tells her to suck it up for another hour. Which she does and then, in the privacy of her father’s house, she decides to break dishes. Unfortunately, her PA witnesses it, reports it to Shelby’s record label and they make the decision to ship her off to a dude ranch for some rest and relaxation.

I did a holdup, wait a minute after those chapters. This poor girl loses her father in a horrific plane crash, is told that she can’t grieve in public AND when she has a totally normal reaction, she is told that she needs rest and relaxation before going off on a tour (oh yeah, forget to mention that Shelby has an alter ego called Tara Gibson who is a pop star) that is supposed to bolster her career. I kinda wanted to smack the PA upside the head and say “Why???”. But it’s a book so the best I could do was shake my head, say to myself “idiot” and read on.

The ranch was probably the best place for her, looking back. She was able to come to terms with her father’s death and find herself. Of course, she meets the best-looking cowboy on the ranch. Cooper.

Cooper has his own issues and I got a little frustrated at how long it took for the author to show exactly why he left Boston and why he only talks to his younger sister. All we knew, for a little while, was that he was an ex-cop who left Boston and the police force because of an investigation turned bad. Exactly what the investigation was about, who was involved in the investigation and where the investigation led was revealed, slowly, throughout the book. To be honest, I would have loved to know everything up front and then have things happen from then on.

I had to laugh at so many people seeing through Shelby’s disguises and how many people she told the truth to….after being told keep it on the down low. I mean, the people that she told did keep her secret but still. It wasn’t the point, she wasn’t supposed to let anyone know who she was. And that failed….in a big way.

Cooper and Shelby’s romance was sweet and slow. I loved that while they had sex, the author didn’t feel the need to spell it out and just left it as they went to bed. I got to use my imagination, gasp, during those scenes and I loved it!!!

Both storylines were wrapped up in a very satisfactory way, even if Cooper’s did give me some concern before it ended. I also liked how a certain person was forced to apologize for his behavior to him.

The end of the book was pretty good too and everyone got what they wanted. It was a HEA :). I do want to know what happened to the pig, though…..lol. What pig? Read the book!!!

How many stars will I give Meant to Be: 4

Why: I really enjoyed reading this book, even though it started off on a sad note. The Cooper’s plotline alone was enough to keep me reading but throw in Shelby trying to rediscover herself and I couldn’t put it down. Add that the romance was a slow burn and it made for a pretty good read.

2 thoughts on “Meant to Be (Whisper Creek: Book 5) by Maggie McGinnis”