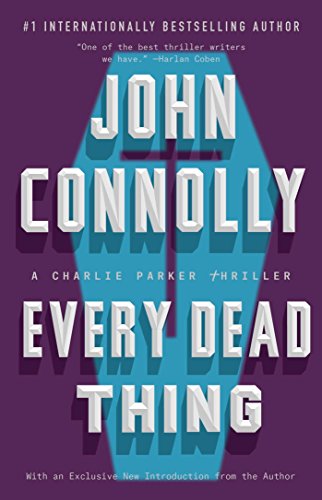 Hailed internationally as a page-turner in a league with the fiction of Thomas Harris, this lyrical and terrifying bestseller is the stunning achievement of an “extravagantly gifted” (Kirkus Reviews) new novelist. John Connolly superbly taps into the tortured mind and gritty world of former NYPD detective Charlie “Bird” Parker, tormented by the brutal, unsolved murders of his wife and young daughter. Driven by visions of the dead, Parker tracks a serial killer from New York City to the American South, and finds his buried instincts — for love, survival, and, ultimately, for killing — awakening as he confronts a monster beyond imagining…

This book spooked the pants off me and I don’t normally get spooked by books. From the beginning, when Charlie’s wife and daughter were murdered by the end…..I got chills. Put it this way, I couldn’t read this book at night because of how creepy it was. The one time I did, all I dreamed about was human beings being cut open and flayed. So yeah, I read this book during the day.

I felt awful for Charlie. I mean, I can’t imagine coming home to my family murdered. I don’t even think I could cope. Actually, I know I couldn’t cope. So I was a little surprised when it looked like he had moved on. New job, new house. Then everything came to a head when he takes a job to find the missing girlfriend of the son of influential women and clues show up about his wife and daughter.

My favorite characters had to have been Angel and Louis. A thug and an assassin in a relationship, yes please!!! Louis I liked because of his fashion style and the fact that nothing seemed to phase him. Also, I think I would want him as a backup when things when south. Angel was very cute (but also very dangerous) and you could tell that he genuinely loved Louis.

The action in this book was insane. It went from zero to bloodshed within a chapter. Which is OK with me. Sometimes I need that!!!

I liked that the author really didn’t play up the paranormal part of the book until the end. And even then, it was understated. Creepy but understated. With everything else that was going on in the book, I liked that.

I will say that the author did have me going about who The Traveling Man was until the end of the book. I did have a suspicion as to who it was but with everything that was going on in the book, I kinda said “Nah”. Well, color me surprised when it ended up being who I originally thought it was.

The end of the book was very good. All of the storylines were tied up, for the most part, and I could see where the author left an opening for the next book. Which I am going to have to read because I got hooked on this series!!

How many stars will I give Every Dead Thing: 4

Why: A very intense mystery will keep me guessing and I refused to read at night. The violence and bloodshed might be a little much for some people but I didn’t care.

Why: Sexual situations, violence, and language

One thought on “Every Dead Thing (Charlie Parker: Book 1) by John Connolly”