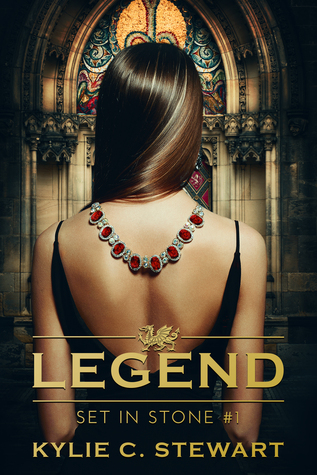 When Alexandria York fatefully met the Duke of Avalon in the woods she never imagined she’d be working for him. A rising star of the art scene in London, Alexandria agrees to commission a piece for the infamous noble. His intentions quickly become confusing as chemistry grows between the two.
As she dreams of the man she can’t have, the one she can lure her deeper into his lair. Will the man she once loved be her Knight in shining armor and slay the Dragon? Or will the Dragon consume her before it’s too late?

In this life, his heart was the stone and her love was the sword…

The Duke of Avalon has lived a long and lonely life. He has chased his love through the centuries and every time she has jilted him, but not this time. Tormented by inner demons, Avalon seeks to keep his secret safe while vowing to win Alexandria York. When his former charge, Lancer Rivers comes back into both their lives, he finds him more than one challenger for her hand. Can he protect Alexandria not only from the man after her very life but also himself?

Kylie C. Stewart joins the myth of King Arthur and his Knights of the ‘Round to modern-day. Join Avalon and Alexandria on an adventure full of magic, adventure, and romance. For once is in the past, and the future is now.

Set in Stone is a newer, darker take on King Arthur. Told from Arthur/Avalon’s point of view and Alexandria point of view, you are taken on a dark journey with a man who has nothing to lose and woman who has the ability to bring him to his knees and possibly destroy him if she chooses wrong.

When Kylie approached me to review Set In Stone, I did an internal “Squeee” of delight. I am a sucker for anything about Camelot/King Arthur/Knights of the Round Table. Seriously, if I see a book that even mentions it’s about that, I snatch it right up and devour it. Which was the same with this book. And I have to say, this was a great and different take on the King Arthur myth.

I wasn’t expecting Arthur/Avalon to be a dark as he was. He came across as a man who would do anything to keep his love this time around. Anything and that included making a move on her and claim her as his own. He was so passionate when he was alone, with M or with Alexandria in her dreams. But when he was with Alexandria in real life, he was so cold….so possessive. It actually confused me at times and made me wonder why? But then I remembered the triangle of Guinevere/Lancelot/Arthur and a light bulb went off over my head. He was jealous and afraid of getting hurt.

Alexandria kinda rubbed me the wrong way at first. She gave such mixed signals about Arthur/Avalon that even I was confused. I mean, she created a statue of him (Legend) after first meeting him but they proceeded to try and put him in the friend zone when he told her that he was starting to have feelings for her. She was also hung up on a guy that seemed to move on and it drove me nuts. I did feel for her when Arthur started getting all possessive. I mean, she had no clue.

Mordred and Morgan Le Fey were mentioned a bit in the book. I figure out what her agenda was other than to drive Arthur/Avalon nuts and Mordred was only mentioned a couple of times. I can’t wait to see how they come into play in the next book.

Merlin was mentioned in the book and I wish that there was more of him. He was so wise and had such great council for Arthur/Avalon. Again, I hope he is in Book 2 more.

The end of the book was great. No twists or anything but I did like how certain events came to pan out!!

How many stars will I give Set in Stone: 4

Why: Like I said above, I love the King Arthur myth and I enjoyed this story. The story was fast paced and I was totally engrossed in the story. I couldn’t read it fast enough.

Why: Language, some violence, and sex