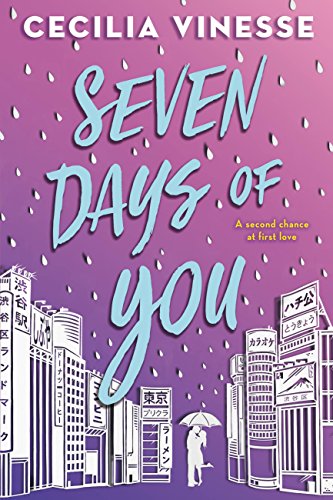 Title: Seven Days of You

Sophia has seven days left in Tokyo before she moves back to the States. Seven days to say goodbye to the electric city, her wild best friend, and the boy she’s harbored a semi-secret crush on for years. Seven perfect days…until Jamie Foster-Collins moves back to Japan and ruins everything.

Jamie and Sophia have a history of heartbreak, and the last thing Sophia wants is for him to steal her leaving thunder with his stupid arriving thunder. Yet as the week counts down, the relationships she thought were stable begin to explode around her. And Jamie is the one who helps her pick up the pieces. Sophia is forced to admit she may have misjudged Jamie, but can their seven short days of Tokyo adventures end in anything but goodbye?

Seven Days of You is a story about a teenager who is leaving behind friends and a city she loves to go back to the United States. This book centers around Sophia and her relationships with her sister, her best friends and the boy who broke her heart 4 years earlier. Everything in the book takes place 7 days before she is supposed to fly back to New Jersey.

I am going to come right out and say it, I couldn’t stand Sophia. While she was 17, she acted more like a child and it really grated on my nerves after the first couple of chapters. I mean, take it when she found out that Jamie was coming back…..her jealousy of his and Mika’s friendship almost consumed her. She was so focused on him becoming Mika’s best friend that it ruined those chapters of the book. To be honest, I skimmed those chapters because she annoyed me so much. The rest of the book really wasn’t any better with her. She refused to listen to reason (ie Allison) when it came to her moving to Paris.

Jamie was another one who annoyed me. He took Sophia’s crap when he came home and didn’t say a word in his defense (even to David who let it “slip” that Jamie was adopted). He just let it roll off of him. At one point, I wanted to say “Dude, what happened 4 years ago is in the past. Man up and stop letting them push you around.” The only reaction that I saw him have, in the entire book, was when Sophia kissed David on her last night in Tokyo.

David, I couldn’t stand. He just oozed player from the first page and, to be honest, I wasn’t surprised when something major was revealed later in the book. And I hated his nicknames. Sofa? Really? When I heard that, I imagined a girl who just let people sit all over her. He was condescending and to be blunt, a jerk.

Mika was actually my favorite person in the book. She came across as true (as weird as that sounds) and she fought for Sophia’s friendship when that stuff with David went down. I wouldn’t say that I loved her but I enjoyed it when she appeared in the book.

My other favorite person was Allison, Sophia’s sister. She had her own issues, her girlfriend dumped her and she was hurting, but she looked out for Sophia the best way that she could. I mean, she even took her to that tower and out to lunch to try to find out what was wrong with Sophia. She cared and she didn’t want Sophia to get hurt by their father…who makes promises and then breaks them.

I did think the story was cute and loved that it was set in Tokyo. I think the author did a great job of capturing Tokyo through teenage eyes.

The end of the story was pretty standard with a hint of a HEA.

How many stars will I give Seven Days of You: 3

Why: While I liked the story and the location, the characters ruined the story for me. Sophia and David acted like toddlers, Jamie wouldn’t stick up for himself and Allison was an emotional mess and was absent for 90% of the story. The only person who I connected with was Mika and even she was a jerk at points in the book.

One thought on “Seven Days of You by Cecilia Vinesse”