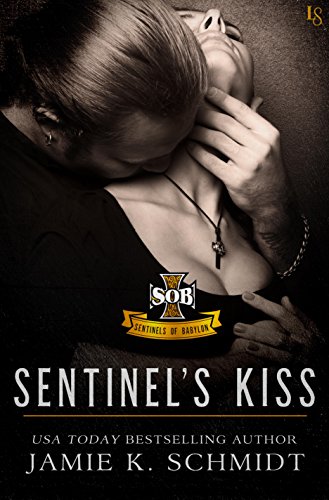 A fiercely protective bad boy. An innocent reporter in serious trouble. They shouldn’t work, but after he throws her onto his bike, there’s no going back.

If Josh Lehman learned one thing as a Green Beret, it’s patience. Josh founded the Sentinels of Babylon because he was sick and tired of watching scumbags cheat the system—scumbags like the man who murdered his sister. Of course, if Josh’s sniper rifle was linked to the death of his ex-brother-in-law, that might be a problem. The bigger problem is the nosy reporter who’s this close to exposing the club. Josh has to find a way to keep her hot mouth from talking . . . but he’ll be damned if he lets someone take her from him. Not on his watch.

Ashley Carver thought she’d do anything for a scoop. That was before her latest story leads to multiple attempts on her life. Ashley’s been investigating a homicide that has gone unsolved for five years when she uncovers evidence tying the vigilantes of the Sentinels of Babylon to a revenge killing. Now she’s in their crosshairs. But after Josh defies all notions of club loyalty to come to Ashley’s aid, soon they’re burning up the sheets—and taking on the world.

Sentinel’s Kiss is a wild book with action that takes place not only in between the sheets but out of them. This book continues the Sentinels of Babylon series which follows 4 friends who form a motorcycle club and who are vigilantes. They are the people who defend the innocent and make sure that justice is paid when the legal system fails the victims. Evil was a detective, Sentinel was a Green Beret, Warden was a correctional officer and Ryder was a CIA operative. On the top of their list….making sure that Sentinel’s sister’s killer, her husband, was killed.

Where do I start with Ashley? I was in awe of her sexual prowess and that she had next to no inhibitions. I mean, sex on the side of the road, in an elevator AND in a parking garage…..I was in awe of her. But, as I got into reading the story, the more I began to like her and the more I felt bad for her. She overcame so much to get where she was. I also felt that she was perfect for Josh. She was the ying to his yang. What I really liked about her was that she was a very determined reporter and she would go the distance for her story.

I loved Josh!!! He came across as such a bad boy but he was a softy at heart. I mean, he volunteered at the hospital and cuddled babies in the NICU as a tribute to his sister. And he did it shirtless (skin to skin), which made my ovaries melt. ((Swoon)). He was a ladies man too. Sentinel loved the ladies and they loved him back. But, once he got reinvolved with Ashley, there were no other ladies. I also liked that he was committed to bringing Stan to justice.

The sex between Josh and Ashley was over the top. The two of them were like bunnies, doing it everywhere and anywhere. The pages sizzled with their sex scenes. S-I-Z-Z-L-E-D. I had to fan myself a few times, that was how hot it got!!

The storyline with Stan (Josh’s sister’s husband) was wrapped up in what I thought a pretty satisfactory way. The only thing I didn’t like was that Ashley had to get hurt in order for it to go down. The other storylines were ended right around the same time Josh went to Massachusetts and there was only the Stan storyline.

I loved the end of the book. Talk about the ultimate HEA!!!

How many stars will I give Sentinel’s Kiss: 4

Why: This would make a great beach book and, to be honest, was a lot better than Necessary Evil. The plotline was more streamlined, the characters a lot more likable and the sex was through the roof hot. The vigilante theme wasn’t as in your face as it was in Necessary Evil but it was there.

Why: Sex, Language, and violence

One thought on “Sentinel’s Kiss (Sentinels of Babylon: Book 2) by Jamie K. Schmidt”