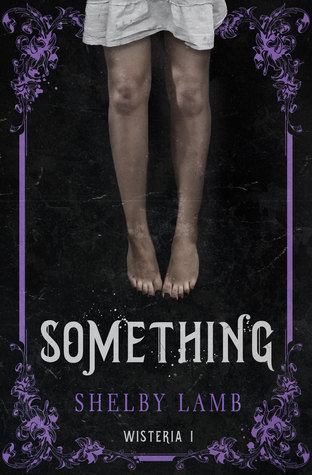 They say be careful what you read. Something is wrong. Something is very wrong. It can happen to anyone. This is just four teenagers’ story. Aubrey Golding hates her face, her body, and is devastated after Nathan Silva leaves her. Alone, suicidal, and desperate for love, she discovers a book called Something and unknowingly links others to a dark and terrifying curse that is beginning to consume her. Nathan is glad to be moving on with someone new and can hardly believe what is happening now. Wild child and amateur porn star, Bella Broadhurst, loves bullying that “emo whore” Aubrey with the other girls, but mostly she loves partying, hookups, and plain ol’ drama when terror arises. And Kendra Coke is just a new teen mother working on a delicate relationship when things start becoming utterly bizarre. Chilling sleep disturbances and figures hiding in the corners of their rooms are just warnings of what is to come. Be careful what you read, they say. Tread carefully.

A quick warning before I start my review…..there are triggers in this book and I will be mentioning them. So, do not read this review if it will affect you in any way!!

Now, onto the review.

This is a book that you can’t read without feeling sympathy/horror/anger (or a combination of all three) towards the main characters. Their lives are so messed up that it isn’t even funny. Actually, the only halfway normal one, if you call her that, is Kendra. Her only issue is that she is 15 and having twins. Other than that, she is probably the nicest person in the book and I felt awful when what happened to her happened.

I felt awful for Aubrey. She is bullied mercilessly, she has self-esteem/mental health issues, she is stalking her ex-boyfriend and she has self-esteem problems. She self-medicated through sex, drinking, drugs, and cutting. At one point in the book, she attempted suicide. When she did reach out for help, she was told she was imagining things and it was all in her head. Even her teachers at school were jerks. The poor kid could not catch a break. Her only solace was reading a book that she found in a used bookstore, a book called Something and hanging out with her best friend, Adelaide. But there are things that Aubrey doesn’t realize that Adelaide is hiding from her. She also doesn’t realize what Something is and what it could do.

All Aubrey wanted was for someone to love her for who she was and….someone listened. But that someone (or something???) was really not the person that she should be going for. Because they wanted to possess her….totally.

I really thought what Nathan and Adelaide did to Aubrey was awful….mainly because Adelaide was Aubrey’s best friend. Nathan really should have moved onto someone else and you know what, I didn’t blame Aubrey for reacting the way she reacted when she found out. I think I would have done the same thing.

The horror part of the book was truly that. I actually jumped in places (like when Audrey discovered the hidden door that led to a secret passage in Tyler’s house). The author did a great job with writing just enough to get your brain working and then she would change the scene. Gaaahh!!!!

I thought the author did a great job ending certain storylines (of course in the creepiest way possible) and merging the Audrey/Nick/Adelaide storyline.

The way the book ended totally hooked me into the next book. I need to know what happens!!!

How many stars will I give Something: 5

Why: This is a genuinely creepy fantasy/horror book with characters that I could relate too. I was sucked into the book from page one and literally could not put the book down. I would be hesitant to let anyone over the age of 16 read this book because of the triggers. Other than that, the book was great!!!

2 thoughts on “Something (Wisteria: Book 1) by Shelby Lamb”