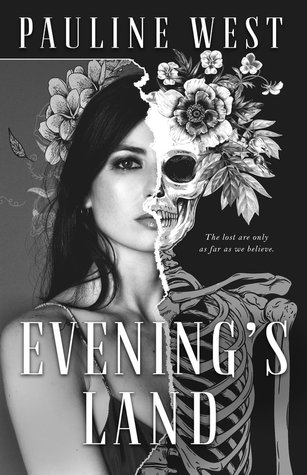 Reeling after her best friend’s suicide, Ada Walker falls under the spell of the collective subconscious, the EVENING’S LAND, searching for Faye’s soul with a rakishly hypnotic ghost named Christopher.

This review is going to be so very hard to write. Not because the book was good, it was very good, it is because I am going to have a hard time not giving away some major that happens in the book. So I am very carefully editing what I am writing here (I have already deleted 3 starting paragraphs but will be keeping this one).

I think the author did a great job highlighting what happens after someone commits suicide. What happens to the people who are left and how it strains relationships/friendships. I really wanted to hug Ada because of that trauma. No one should find their best friend dead.

I also wanted to hug Faye. She had a crappy home life. A father who seemed to disdain her and a mother who went along with it. The whole hiking trip in the cave nailed that for me and showed me why Faye took the risks she did and why she basically clung to Ada. I think that’s why she broke when she was raped.

Not that Ada had it any better. Her mother slept around, her father was an enabler and Ada started cutting as a direct result of that. So, when she found Faye, it pushed her over the edge. I think her parents did the right thing by moving her across the country so she could heal. Too bad that they couldn’t fix their own issues.

I think if I fell into the Land like Ada did, I would have done the same thing. I would try to find Faye’s soul and try to pull her out of her Purgatory. And I think I would have been as surprised as Ada was if I met a boy in the Land and I would have been even more surprised when he appeared in my bedroom and started to seduce me.

Speaking of Christopher, I was so wrong about him. So wrong and I got so mad at myself for being wrong. I really wish that he didn’t do what he did because it really pole-axed me and definitely changed the story. Want to know what it was??? Read the book, you won’t be disappointed.

The Oliver Roamery storyline was truly scary. I got goosebumps when he appeared in the story. He is one of the most genuinely creepy characters written. Evil just poured off of the pages when he appeared.

When all 3 storylines (plus the secondary storyline with Mary and Jupiter) meet, it is explosive. Again, read the book if you want to find out how/why it was explosive.

This book was told in 1st and 3rd person but the author did a great job of distinguishing not only who was speaking but what time frame. The whole first half of the book was basically flashbacks starting 3 years previously and alternating between Ada and Faye. Once Faye commits suicide, no more flashbacks, obviously but then the author switches to 3rd person to start the Oliver Roamery storyline.

The end of the book wasn’t what I expected, at all. I am still shaking my head over it.

How many stars will I give Evening’s Land: 5

Why: This is the first Gothic fantasy that I have read and I have to say, I loved it. The author has an almost lyric style of writing and she keeps you very engaged throughout the book. The story and sub-storylines were brought together with a bang and the book ended with a bang.

Will I recommend to family and friends: Yes but with a warning about the suicide scene and the rape scene

Why: Language, Sex (forced and consensual) and mild violence