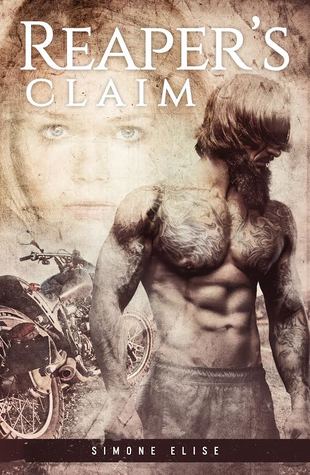 In my motorcycle club I’ve earned the name ‘Reaper’ and now I have my claim on Abby Harrison.

Reaper:
I didn’t know what love was, but I knew what want was, and I wanted Abby. When I walked out of the club and saw her I was stone cold sober. She was quietly beautiful and unlike any other woman I’d had before. But she was the daughter of the president of Satan’s Sons MC and completely out of my reach.

Abby:
Everyone knew The Reaper and how he got his name, so I never expected him to be my salvation when my sister’s drunk boyfriend wanted to lay hands on me. I thought my innocence would be lost in that alley until he showed up and saved me. I know being with Reaper will lead to trouble, but I don’t know if I have the strength to stay away.

What I liked about Reaper’s Claim:

What I disliked about Reaper’s Claim:

How many stars will I give Reaper’s Claim: 3

Why: I was so torn on giving this book a lower star rating. I actually liked the book and found it refreshing that it gave a pretty realistic view on what motorcycle clubs are really like. But between the multiple 1st person POV’s and a very unlikable main character, I couldn’t get into the book and that affected my rating.

Will I reread: Probably

Will I recommend to family and friends: Yes but I would warn them about the sex, language, and violence in the book.

Why: Sex, violence, and language.