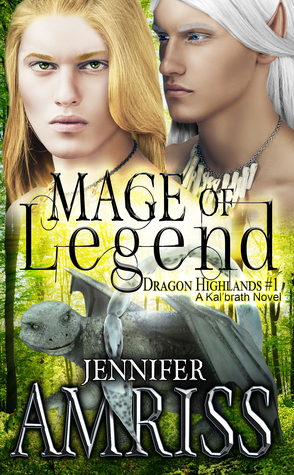 Can be read out-of-order from series: Yes, the first book in the Dragon Highlands series

Dimensional Rifters Were Nothing But Legends.
Until now…

Ages ago, one of the old gods threw Minuvel, the last Ivari, into a dimensional prison. She was too powerful to kill and too dangerous to let roam free. But her vault was lost.

A Spoiled King and A Skilled Hunter.

After a beautiful stranger saves his life, Xastrian, the new Dragon King, owes Velithor a life-debt. But as the two join forces to battle the crazed Ivari who shares their prison, he discovers he wants so much more. Soul-bonding with the shy, resourceful hunter would be worth anything. Even facing death a second time.

Xastrian must rely on Velithor’s knowledge of the forest. Velithor must help Xastrian regain his power. And one of them must tap into the magic of legend to become a dimensional rifter before the Ivari drives Xastrian mad and ruins their chances of ever finding their way home.
Reading Order

This side duology to the Kings of Kal’brath series is set in the same universe where Mother, the sentient planet, cradles the races of three parallel worlds: Adradis of the elves and other magical races where the continent of Kal’brath resides, Earth of the magicless humans, and Morka of the magic-negating bashkai. If you loved the Kal’brath books, this duology brings back Velithor for more fun, romance, and gripping adventure.

These light fantasy romps are sure to be favorites you will want to read again and again.

Please note that this is book contains an M/M (Gay) Fantasy Romance subplot.

Want to know the reading order for the entire universe? Here you go!

I was so excited when Jennifer contacted me to let me know that not only did she have another Kal’brath novel coming out and it was going to have Velithor in it, I was super excited. I didn’t come out and squeal like a teenager at a boy band concert but it was pretty close.

I am going to admit, I wasn’t a fan of Xastrian at first. He takes off after an assassination attempt (hello, an unknown person wanting to kill you!!) to practice his magic, which he isn’t very good at and not only did he end up blasting the area he was in (with everything in it) in between dimensions but he also almost died. After Velithor saves him, he acts like a spoiled brat. There were times I wanted to smack him. But he did start to grow on me. Slowly but he grew on me. By the end of the book, I really liked him.

Velithor, oh Velithor. I was so happy to see that he had a love interest that worshipped him. I actually cried a few times in the book. Once when Niral died saving him from the harpies (which, btw were not what I thought they would look like. WoW totally ruined that for me…..lol). Once when the mama grizzly died, leaving the cubs orphans and once when Velithor explained why he has white hair and Xastrian told him that he should feel cherished. Ahhhh…waterworks.

The sex scenes between Velithor and Xastrian were beyond hot and so sweet. The feelings between both of them just came off the pages and to be honest, it made the sex even sweeter to read. What I really liked, though, was that they had sex twice. The rest of the time, it was them making out and letting their feelings grow between each other.

The storyline involving Minuvel was awesome. She was a witch with a capital B and didn’t fail to pull out all the stops when he flat-out told her no. I was neutral about her at first (I mean, I would be little witchy if locked in a prison for as long as she was) but when she tortured Xastrian in the tunnels, I hated her. But she did get what was coming to her so I felt vindicated.

The storyline with the sithak was interesting. Mainly because how he was connected to both Velithor and Xastrian. I wasn’t expecting to like him that much or for him to actually care about them both. From the last book, I thought that he was a monster and I am glad that my image of the sithak was changed. I hope that he makes appearances in other books!!

The end of the book was pretty open-ended. I do have some questions that I hope will be answered in the next book. Like how will a certain engagement end up? And who is the assassin? Will the cubs stay with Velithor and Xastrian?

How many stars will I give Mage of Legend? 4