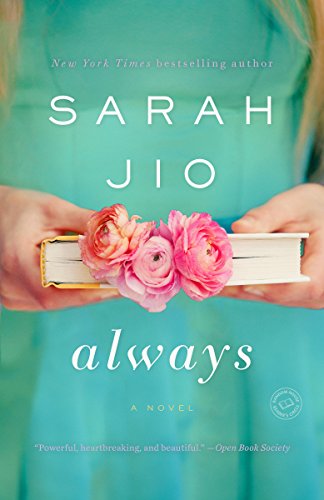 From the New York Times, bestselling author of Blackberry Winter and The Violets of March comes a gripping, poignant novel about the kind of love that never let’s go, and the heart’s capacity to remember.

While enjoying a romantic candlelit dinner with her fiancé, Ryan, at one of Seattle’s chicest restaurants, Kailey Crane can’t believe her good fortune: She has a great job as a writer for the Herald and is now engaged to a guy who is perfect in nearly every way. As they leave the restaurant, Kailey spies a thin, bearded homeless man on the sidewalk. She approaches him to offer up her bag of leftovers and is stunned when their eyes meet, then stricken to her very core: The man is the love of her life, Cade McAllister.

When Kailey met Cade ten years ago, their attraction was immediate and intense everything connected and felt “right.” But it all ended suddenly, leaving Kailey devastated. Now the poor soul on the street is a faded version of her former beloved: His weathered and weary face is as handsome as Kailey remembers, but his mind has suffered in the intervening years. Over the next few weeks, Kailey helps Cade begin to piece his life together, something she initially keeps from Ryan. As she revisits her long-ago relationship, Kailey realizes that she must decide exactly what and whom she wants.

Alternating between the past and the present, Always is a beautifully unfolding exploration of a woman faced with an impossible choice, a woman who discovers what she’s willing to save and what she will sacrifice for true love.

A bit of a warning, this book is a tear-jerker from the beginning. I was a bit surprised at how early the tears started in the book for me. I went into reading Always knowing that it was chick lit and chick lit always turns me into a mushy mess. I just wasn’t expecting it by Chapter 2.

While I sympathized with Kailey, I was kinda annoyed with her. She should have told Ryan what was going on with Cade from the beginning, instead of keeping secrets. I mean, her boss (who was super supportive and unlike any boss I have known) and her best friend were voices of reason. “Tell Ryan. He’ll understand.” She doesn’t and then gets upset when Ryan finds out and he gets upset. What was he supposed to be? Happy that she is devoting all her time to helping the one man who disappeared on her 8 years earlier. The fact that he was at least understanding showed what a great guy he was.

Even before she realized it, I could tell that Kailey was still in love with Cade. I mean, she went and hunted him down after she saw him outside the restaurant. She became his advocate when the hospital decided that people who had insurance and were rich had more priority over those who were poor and didn’t have insurance (which is an unfortunate reality for most people these days).

Speaking of that, the love story between Cade and Kailey took my breath away. They loved each other so much and it just came off the pages. Like any couple, they had their problems. So when he disappeared, I could see why Kailey was devastated.

But what sold me on the book was the realistic insight to homelessness. People who are homeless are treated like they are below other people. All because they don’t have the money or a place to live. People are under the incorrect assumption that most homeless people are drug addicts. Not true. A huge majority of people homeless are people who used to have a house and a job and through unfortunate events are living on the street. There are not enough shelters to keep up with a growing homeless population….which was correctly portrayed in the book also. As was people’s views of them. A little compassion can go a long way because you never know, you could be that person on the street. At the end of this review will be a link to the National Coalition for the Homeless. Click on it to learn more about how to help shelters in your community.

I did like the ending of the book and felt that the story had come full circle.

How many stars will I give Always: 5

Why: This was a genuine tear-jerker of a book. Like I said above, I started crying about the 2nd chapter and didn’t stop. The love between Cade and Kailey was so real, so raw that it came off the page.

National Coalition for the Homeless

One thought on “Always by Sarah Jio”