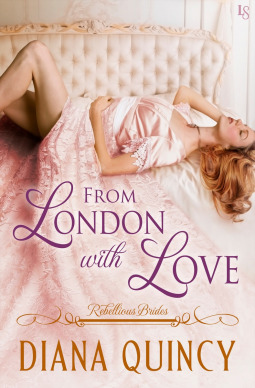 Title: From London with Love

From London with Love – Book 2

Emilia St. George is moments away from marrying the admired grandson of a duke when the man who once jilted her decides to kidnap her at the altar. It’s the second time in five years Hamilton Sparrow has ruined her wedding day, and Emilia isn’t about to forgive him. The mere sight of her ex-fiancé revives painful memories—and, most regrettably, aching desires that refuse to be ignored.

Scanning the guests at Emilia’s wedding, Sparrow spots a familiar face: an assassin he recognizes from his days as a spy in France. Whisking Emilia away, he’s pleasantly surprised by her newly formed curves. Could this be the same flame-haired slip of a girl once promised to Sparrow? And does the fop she still insists on marrying realize what a prize she is? True, Sparrow left Emilia at the altar. But he’s afraid that the only way to right that particular wrong is to risk the one thing he’s always guarded: his heart.

Emilia is about to have the wedding that was denied to her 5 years earlier when her fiance, Hamilton Sparrow, left her at the altar. She was just minutes away from walking down the aisle when she was kidnapped by none other than…..Hamilton Sparrow. His reason for kidnapping her….there was an assassin in the audience and that assassin was there to kill her.

He brings Emilia to his manor, where she notices that his housekeeper is overly friendly with him. Put it this way, she was shoving her boobs in his face, giving Emilia (who she referred to as “the ginger”) dirty looks and the kicker, she tried to give Hamilton a blow job while he was sitting at his desk, which he quickly deterred but not before Emilia sees.

The assassin catches up with Sparrow and Emilia at Sparrow’s estate….where Emilia brains him with a rock while Sparrow fights him. The injury to his head, causes the assassin to go into a coma. Which is bad in a way because he can’t tell Sparrow who hired him.

So begins the mystery of who wants to kill Emilia and why.

Come to find out that there are a couple of people who want to kill her and they all have motives. Her cousin, a recluse, whose parents were murdered in their beds years ago and who people suspected of killing them. A shady art dealer who Emilia caught swindling people and got him fired from his job. Her current fiance who, come to find out, is a spendthrift and really isn’t nice to Emilia.

All the while, Sparrow is fighting a growing attraction to Emilia and he is trying to figure out how to get out from under a mountain of debt that the previous holder of his title left him when he died.

I really enjoyed this book. It was definitely something that I needed to read after the last few books I have read. The humor in the book was great.

I really liked Emilia. She knew what she wanted and wasn’t afraid to go after it. Which was pretty funny in some scenes (like when she wanted to paint Sparrow naked…she was tenacious….lol).

Sparrow wasn’t the perfect hero either. He was hurt, badly, in the past by a former lover and he couldn’t move past that. So, what does he do? He forms attachments that won’t require him to get emotionally involved with the women. If that starts to happen, he ends the relationship. The gradual change in him took place from the minute he kidnaps Emilia. He turned down sex (from his housekeeper) because Emilia was there.

The sex scenes between Sparrow and Emilia were very hot and I loved how she propositioned him….lol.

I was surprised at who the person was who wanted Emilia dead and the reasons why. Well, I take that back. I wasn’t surprised at that because it made perfect sense. The end of the book was perfect. I do wish that there was an epilogue to show how Sparrow and Emilia were doing. I am sure, though, that they will make an appearance in the next book!!

How many stars will I give From London with Love? 4

Why: This was a funny, sexy, mystery/romance that keeps the pages turning.

2 thoughts on “From London with Love (Rebellious Brides: Book 2) by Diana Quincy”