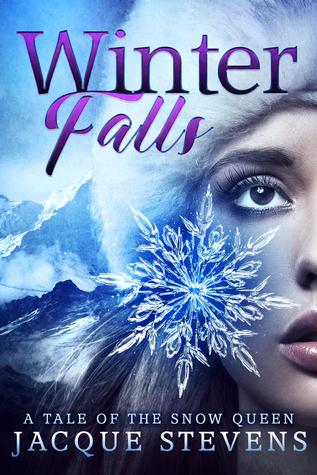 Katie knows better than to believe in happy endings.

She learned there was no such thing after her mother died. In the postindustrial town of Riverside, Katie struggles to care for her distant father and his failing hotel. Her only comfort lies in the arms of her true love, Shay.

Yet one evening, he disappears without a trace.

Devastated, Katie jumps off a bridge in the dead of winter, expecting to meet death at the bottom. Instead, her fall transports her to a snowy netherworld, where trapped souls take on the form of animals and the only thing that matters is survival.

When Katie discovers that Shay has been kidnapped by a deadly witch called the Winter Queen, she goes on a journey to find him, traveling through the realms of storybook fairies, princesses, thieves, and monsters to bring him home. But the path is harsh and dangerous. Will Shay and Katie be reunited? Or be forever trapped within an eternal winter?

A retelling of the classic fairytale The Snow Queen, WINTER FALLS is a young adult epic fantasy romance which examines the trials of depression and mental illness in a magical world of action and adventure.

What a great retelling and imaginative retelling of the Snow Queen.

Told in 1st person and through flashbacks, after Katie jumps off of the same bridge that her mother, Winter Falls explores depression, suicide and how it affects the people left behind. The way the author wrote about it and the sensitivity that she showed about such sensitive subjects was amazing. I also like that she didn’t glamorize suicide, as I have seen in some books. Beth’s reasons for committing suicide were awful and I cried when the reason was revealed.

I liked how Katie’s character wasn’t perfect by any means. She is a snob, keeps herself away from her family and openly mocks her stepmother as she tells fairy tales to Katie’s younger brother and sisters. You are hard-pressed to like her in her flashbacks because of how she is.

But, everything does change when she enters the land of fairy and starts on her quest to get Spring, Summer and Autumn’s tokens of powers. You could just see her come into her own and you could see her processing how closed off she was, how rude and how snobby she was as she is retelling her life story and how she fell in love with Shay.

Shay’s character was as flawed but he was aware of it and he did try to better himself. I felt awful when he was talking to Katie about how bad his home life was after his mother died and when Katie’s stepmother basically told his father to get lost.

Katie’s quest was different and full of surprises. The people/animals that she met and helped/were helped by stood out to me. Each season was basically her finding herself and her understanding that she didn’t need to live her life the way she was and that only she could change her life.

The climax of the story was great and I was put on edge. I did get slightly emotional during a certain scene with Shay and Katie.

All of the storylines were resolved by the end of the book. I really liked how they were resolved in realistic ways. Not every storyline was a HEA and it was refreshing to read that.

The end of the book was great. It was pretty standard but the changes in Katie and Shay was there for everyone to see.

How many stars will I give Winter Falls: A Tale of the Snow Queen: 5

Why: This was a book that I really got into and it has to be the most creative retelling of the Snow Queen that I have ever read. The characters are engaging and the storyline was great. I really liked that the story was told, in part, by flashback. It made for an interesting read. The author also did a great job of covering the sensitive subjects of suicide, mental illness, child abuse, and rape.

Why: This is not a book for a tween or younger teenager. Because of the content (suicide, mental illness, child abuse, rape), I would suggest that older teens (16+) read this book.

2 thoughts on “Winter Falls: A Tale of the Snow Queen by Jacque Stevens”