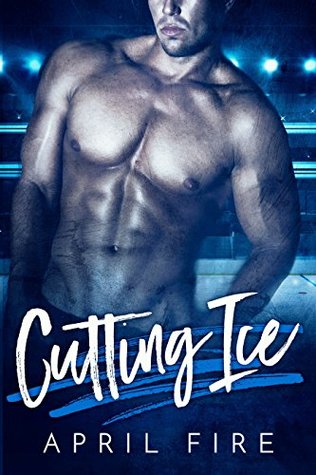 Heartbroken Emily moves across the country to cover an up-and-coming hockey team – much to her chagrin. Knowing that this could be her big break she leaves her entire life behind and moves to Kingstown, where she meets Sam, the star player of the hockey team and a rapidly rising star. Though he acts cocky in front of her, he slowly begins to reveal his insecurity and warm up to her.

This is a standalone novella with No cheating and with HEA ending. It’s guaranteed to keep you hot on a cold night, so prepare yourself for a few hours of fiery fun.

I really liked this novella. After the last book I read and reviewed (not that I didn’t like it, it was just drained me because of how intense it was),  I needed something that I could just sit back and not have to think too hard about. And Cutting Ice was this book.

Told from alternating 1st person perspectives, we are introduced to Emily, a 23ish-year-old sports reporter, who is from the BIG CITY. I put it in capital letters because, in the first chapter, Emily did make a big deal about moving to Kingston to do a story on the local hockey team. A long-term relationship was out of the question for her boyfriend (he wasn’t going to wait around for her), so she heads to her assignment single.

Sam is a member of the hockey team who has the chance to make it big but he is hesitating because he has never left Kingston. Ever. He meets Emily at practice and invites her out for drinks. It doesn’t take long for things between Sam and Emily heat up. It heats up to the point where they have sex in his car.

The rest of the book is pretty straightforward. Even though they both have sworn off of having sex with each other, it ends up happening.

I do like that the “L” word wasn’t even mentioned in the book and I thought that was refreshing. I mean, they do end up together but they weren’t spouting off how much they were in love with each other.

The sex was pretty hot and the author used safe sex….gasp. Every single time they bumped uglies, a condom was brought out and put on. Which, again, was refreshing.

The end of the book was pretty standard. The way it ended does make me wonder if there are going to be other books written in this world.

How many stars will I give Cutting Ice: 4

Why: This is a good book to read at the beach or pool. The plot doesn’t go off in 8 different directions and there are only 2 MC’s.

Why: Explicit sex and language