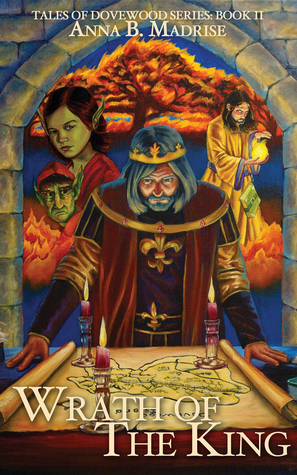 Title: Wrath of the King

The Hobgoblin Queen finds that time is stacked against her to master her newly acquired magic all while preparing for the impending war with New Taleggia. In a final plea to bring the Trow home to Boggleann she strikes a deal with those malevolent shadows hoping that her bargain does not cost her the very souls that she is trying to protect. King Vezzen, the supreme authority over all of New Taleggia and the town of Bettelburghal is bitter that his rule extends no further. Trapped on the island of Dovewood he is obsessed with claiming the rest of its land and tapping into the untold magical treasures that await him deep in the mountains of Boggleann; home of the goblin-demons which he plans to destroy. With a single Simulacrum ring in his possession and the knowledge of how to use it, King Vezzen decides the time has come to smite his enemies once and for all. Will Dovewood survive the wrath of the king or will a new era of evil overtake her?

Wrath of the King starts off shortly after Mundane falls through the pool into Boggleann, the Hobgoblins hidden city.  She is taking a tour of her new kingdom, revealing in the beauty of the Hobgoblin craftsmanship. As she walks, she is being watched by her new subjects, the Hobgoblins.

She sends out Scrape and Scratch to find Fickle. Fickle was one of the first Hobgoblins that she met and had helped her in her quest to get the gems to complete the Simulacrum necklace that she now wears. Fickle was captured at the end of The Hobgoblin Queen by the evil King Vezzen and is being held a prisoner in the dungeons under the castle. Unknown to Queen Umadenn (Mundane’s new name), his ring, which allows him to shapeshift, was cut off his finger and is in the hands of Lorcan, Javen’s brother and the Book Mage to King Vezzen, who is experimenting on it to see exactly what it does.

Back in the village of Whistlestoppe, life is going on as usual, except for one thing: the Kitchen Witches are aware of the Hobgoblins and are keeping them a secret from King Vezzen. Two of the Hobgoblins, Guile and Grouse, have stayed in Whistlestoppe and they help out around the village. But that peace will not hold because King Vezzen has turned his attention to the village and vows to eradicate the Kitchen Witches in his mad obsession for power.

Queen Umadenn has learned to shapeshift (thank to her necklace) and she decides to go and visit the Trow, Hobgoblins who have been transformed into evil beings by anger. While visiting them, she promised that they could have King Vezzen if they agree to help her during the battle that Queen Umadenn knows will be coming. They agree and that is when she sees Fickle, who is half transformed. She goes to take him and the Trow try to attack her. She transformed into a spirit being, which fills the cave with light and frightens the Trow.

King Vezzen prepares for battle and the Hobgoblins and Queen Umadeen find help from unexpected sources. There are amazing battles and deaths before the book goes into its amazing climax.

Will King Vezzen win and get into Boggleann? Will Queen Umadeen be able to defeat him? What about the Kitchen Witches and Whistlestoppe? What will happen to them?

Normally when you get into a second book in a series, there is a lull and it falls a little flat. Not this book. It kept up with the speed and the momentum from the first book. It sucked me in and I love books like that. What I also liked that while this book was darker, it was still appropriate for tweens on up. Like I said in my earlier post, I would have my 11-year-old read it.

Queen Umadeen’s resolve to defeat King Vezzen was incredible. For her to go to the Trow and demand that they help her was a true sign of her inner strength. And to go to battle with him after what happened and not try to kill him right away, instead of waiting for the Trow, was another sign too.

I also liked that her friends accepted her for what she was. She thought, with the changes to her appearance, that her friends in Whistlestoppe would not like/accept her. Which made me want to cry.

I also got a little weepy eyed over the Fickle storyline. That poor Hobgoblin :(.

I was happy that I was proven wrong about Javen. He ended up being Queen Umadeen’s biggest supporter. He helped Whistlestoppe in a big way that they can never forget.

The end of the book was a little sad but explained a lot about certain things. Strike that, a lot sad. It ended on a cliffhanger…grrr. Since I am invested in this series, I am going to have to read the next book when it comes out.

How many stars will I give Wrath of the King? 4

Why: I thought that this was a great 2nd book in this series. There was no lag and the author kept up the pace from the first book. I did enjoy learning about the Trow and I also enjoyed reading Queen Umadeen’s experiences in shapeshifting.

Why: Mild violence. No language or sexual situations

One thought on “Wrath of the King (Tales of Dovewood: Book 2) by Anna B. Madrise”