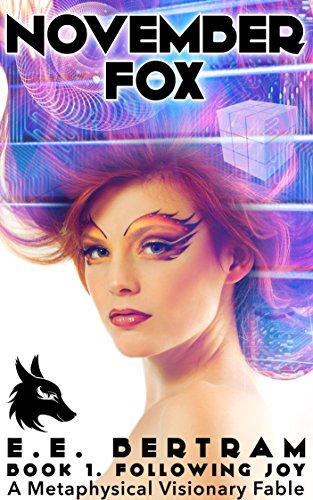 Where to find: Amazon

November Fox has never even heard of other dimensions when a teleporting magical cube appears on her doorstep. With a hole in her heart and a cosmic identity yet to be discovered, the orphan rock star accepts an invitation to find the key within herself that will unlock the mysteries of form.

Little does she know, The Architect, from the race of philosophical beings who create our world of form, has been watching over her all her life.

Grieving Erica, a teacher and writer from London, finds The Architect’s fascinating letter in a glass bottle washed ashore on Brighton Beach. Pages continue to magically appear as she, too, is compelled to follow November’s quest.

Realities eclipse as we embark on a metaphysical adventure through time and space. November learns that harnessing the power of her mind and heart is fundamental, if she wishes to unlock the cube and escape the sometimes sinister, sometimes wonderful dimensions into which she is propelled.

Combining elements inspired by the new thought movement, the law of attraction, magic, mysticism, wisdom and wonder, November learns that she can use the power of dreaming, imagination and positive thinking to remake herself and her world.

November Fox will be enjoyed by readers who liked wisdom-filled, visionary fiction fables like “The Alchemist,” the escapism of “Alice in Wonderland” or the Mind-bending nature of the movie “The Matrix.”

As an idiosyncratic fantasy/science fiction crossover, it is suitable for teens and adults alike.

It comes with 39 illustrations with an Augmented Reality technology feature, enabling readers to further expand their experience.

“Things aren’t always as they seem, do we wake or do we dream?”

November Fox is the first book that I have ever read that incorporates augmented reality in it, and it fascinated me. While I didn’t try it, I found the concept intriguing. Very intriguing and I can’t wait to see how this technology changes reading books in the future. For more information about augmented reality and what extras you could find in the book, click here and scroll down the page.

The main characters that make up the book were very interesting.

Let’s start with The Architect. He is from a race of philosophical beings that build worlds. In his words, he has created the Eiffel Tower, the Sydney Opera House, along those lines. Forbidden from contacting humans, The Architect rebels. He finds a TV in a penthouse and discovers that it only follows an abandoned baby who is named November Fox. He watches over November her entire life and cares for her in his way.

The next character introduced is Erica. Reeling from the sudden death of a very close friend, she is inconsolable. She decides to leave London (where she is a teacher) and go for a walk on a beach. It is there that she finds a red bottle laying on the beach. Inside, written on papers, is a story about an architect and about a young woman named November Fox. As November’s journey grows and continues, more pages magically appear in the bottle.

Everything brings us to November Fox, the woman who the Architect has been watching all of her life. She had grown up to be a world-famous, vegan rock star who had just played the last show of her world tour. November awakens the next day, feeling a bit tired with her life on the road (for lack of a better word) and wants a more profound life purpose and a more balanced existence. So imagine her surprise when she goes out to find her dog, Honey, and find a package addressed to her. Inside the box was a cube and an invitation for her to join LOTNE (Leaders of the New Earth), her cube’s name and birthdate. With opening it, starts her journey to unlocking the mysteries of Form.

I won’t get too much into the book except each chapter is a lesson that everyone should heed. While I didn’t gain the insights that November did, the lessons were valuable.

I will say that Klaus was adorable. He is a baby elephant, obsessed with cake and his timepiece who happens to meet November in the first phase of her journey, and he keeps her company to the end. I also enjoyed Charlie the carpet.

Rebmevon had to be one of the creepiest characters that I have read. For some reason, I had visions of the little girl from The Ring whenever she came up in the book. And her storyline is tragic but the lesson associated is very valuable and unfortunately, November couldn’t face it.

The end of the book was fantastic. Erica and November’s storyline merged, and The Architect was still watching over November. The author did do a great job of setting up for the next book, and the twist thrown in threw me.

I would give November Fox an Adult rating. There is sex. There is language. There is mild violence. I would recommend that no one under the age of 21 read this book.

I would reread November Fox. I would recommend it to family and friends.

One thought on “November Fox-Book 1: Following Joy by E.E. Bertram”