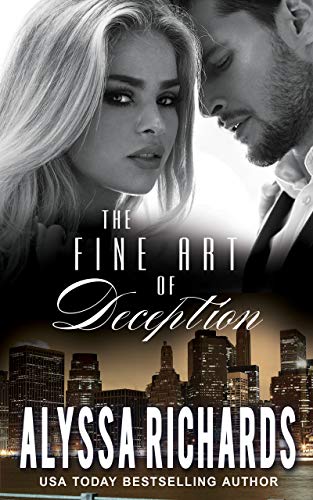 The Fine Art of Deception – Book 1

Art appraiser Addison Montgomery just wants a normal life. One where she can ignore the vicious ghosts who follow her. One where she’s free from her “gift” of touching an object and seeing the owner’s deepest secrets. And one where she can fall in love without having all of the above get in the way.

But when tall, dark, and dangerous gallery owner Blake Greenwood enters her life, normal is the last thing she’s feeling. The man has more secrets than the priceless art he sells, giving Addison’s quest for normal no chance. That, and he may just hold the key to uncovering the truth behind her father’s unexplained disappearance.

Despite her paranormal gifts warning her to stay away, she feels an inexplicable, captivating fascination for him, something that goes deeper than attraction. There’s something between them that’s older than time, and if she can learn to give him her trust, it may just save her life.

I felt awful for Addie in the first few chapters of this book. She had a horrific breakup with her ex-fiance. At first, she glossed over the details. He left her to be with her best friend But, no, her ex-bestie and himself decided to ruin Addie at her job. The author didn’t get into what they did, but whatever it was, it was awful and caused Addie to become a hermit of sorts. She didn’t find comfort at home. Addie has special psychic powers. She is an empath, can see and talk to ghosts, and if she touches an object, she can see past owners and events attached to the object. All 3 of these “gifts” have made her life a living hell.

I couldn’t even imagine living as she did. She barely slept, barely went out, and lived like a hermit. I am a homebody, but it would drive me nuts to not run to the store. Her only comfort is a sapphire ring that she bought while in Paris. For some reason, she dreams that she is the woman (named Sassy) and she has a lover named Jack.

Now, this is where the book got fascinating. Addie meets Blake and has an instant attraction to him. She was almost pulled to him, and she was scared to death. I mean, who wouldn’t be after what she went through.

Speaking of Blake, I liked him…even when he was less than honest with Addie. But he did get on my nerves, a little bit, with his secretiveness. While I understand why he was so secretive, it still bugged me— what a way to start a relationship.

I also liked that the book was pretty cut and dry with who the bad guy was. No guessing, no red herrings…which was excellent.

I will say that the ending was pretty satisfying. More secrets come out, and there were a couple in there that surprised me. Kept me interested enough to want to read the next book and see how everything is resolved.

How many stars will I give The Fine Art of Deception? 4

Why? Great storyline and great characters.

Why: Sex, language, some violence

3 thoughts on “Undoing Time (The Fine Art of Deception: Book 1) by Alyssa Richards”