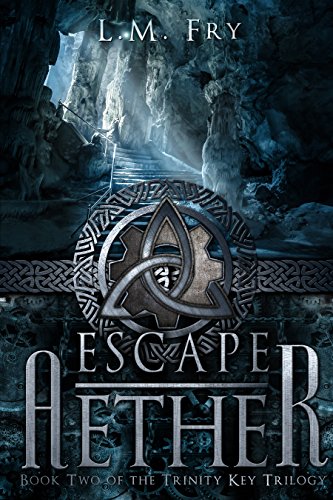 Valera longs to escape her sheltered life and overbearing mother. She just never imagines that her opportunity would arrive after being kidnapped.
Now she has a decision to make: face a world filled with danger and discover her own power, or return home where it’s safe and live in a gilded cage.

What an amazing 2nd book of the Trinity Key Trilogy!!

Escape Aether starts right where Into Aether leaves off, Valera being shoved off the airship platform. Julia kidnapped Valera because she believes that Valera can help her merge the rest of the Trinity Key. After saving Valera, they head straight away to Subterria. That’s where Julia thinks that her father had kept her part of the Trinity Key. Unfortunately, Subterria is in the middle of a civil war, caused when Julia’s father attacked Harmony’s Circus and Harem of the Horrific. While they are there, they meet up with Marcus Corvus, Valera’s step-uncle. Who was even eviler than I remembered in the first book. It is in Subterria that Valera starts harnessing aether and discovers that she can use/control heat.

Then the book shifts to Theo, who is still in Aetherland with her mother, father, Victor, Vivi, Nessie, and Victoria. Theo had discovered that she could cause storms and control lighting. She can also speak to Valera in her mind, but that link has been muted for some reason. The only reason that she knows Valera is alive is that she can still draw on aether. If Valera were dead, then she wouldn’t be able to draw on it. She makes the decision, with Victor and Nessie, that she is going back to Subterria to get Valera back. They get to Subterria shortly after Julia and Valera but get held up after Theo is attacked by Rufus Corvus. She is saved from him (and well, he was pushed to his death) by Victor and Benji, the strong man of Harmony’s circus. His death was awful. I had dreams of being crushed beneath gears for a few nights after I finished the book.

While they are there, they find out that Valera is willingly with Julia and that upsets both Theo and Victor. Valera does apologize to Theo and she wants Theo to tell her family that she loves them.

I’m sorry Theo. This is something I have to do. Tell my family that I love them.

They also find Titus, Victor and Valera’s stepfather, in the dungeon and decide to take him home to Victoria. When they arrive home, they are met by members of the Elder’s guard, which Theo takes out with aether. After she is taken into custody, she is charged, by the Elders of Aether, with heresy and treason. All because she and Valera combined their two keys.

On the Julia and Valera front, things aren’t going as well. After finding out that her father didn’t have the key, Julia decides to head to Boulder, Colorado. She is looking for a town called Goldsville. That is where her father’s vault is. While they were out on their adventure, Marcus finds Goldsville and where he thinks the vault might be, Azure Springs. So they head off to there.

Not going to go much into the book after this point. But I will say there is so much packed into the last half of the book, that it was hard for me to put down. Also, to see Julia and Valera’s transformations during the book was excellent.

I had started off the book not liking Julia. But as the book went on, and I read more and more about her life, I began to feel bad for her. Let’s say that she had it rough.

Valera had been hidden from the world by an overprotective mother and it showed. By the time Marcus came into the story, she was starting to develop a backbone. Her interactions with Marcus made her stronger.

The ending was not what I expected, but it was perfect. Not everything gets resolved and there are even more problems. I can’t wait to read the next book and see how the trilogy ends!!

How many stars will I give Escape Aether? 4

Why? A well-written steampunk/dystopia/fantasy. Very vividly written with great world-building, this is a series that stays with you even after you are done reading it.

Why: Very clean. No sex (just a few kissing scenes with Theo and Victor). Mild violence and no language.