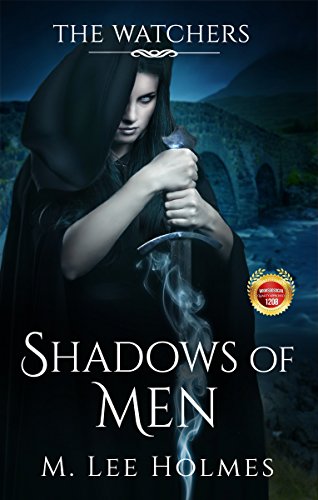 Where to find: Amazon

When Rhada, High Protector of Kaena, is commanded by the King to travel north to investigate a suspicious disturbance, she is less than thrilled to spend over a month on the road. As her companion, she chooses Captain Mayvard Stoneward, the only person who can bear her company. The two of them set off on a journey that will forever change their lives- a journey where Rhada’s past seems to follow her everywhere she goes- a past that the people of the realm have not so easily forgotten.
Meanwhile, Lord Ivran Cassius has plans to overthrow the throne, and at his side is the entire realm, eager to rid themselves of the man who calls himself King. Rhada’s absence leaves King Firion vulnerable, and Lord Ivran only needs to find the right moment to strike.
But none of them are expecting the darkness that has gathered in the north- an ancient sorcerer, seemingly returned from the dead. He is a man who can raise the dead from their graves and control the minds of his prey- a man desperately seeking vengeance.
The realm of Kaena will have to come together to fight this new evil, and only one person can save them all.

This book starts on a horrifying note. Viktor, who is the High Protector of Kaena, is choosing his successor. That wasn’t horrifying; it was the way the successor gets elected. His sword tells him (well its more like a ringing, very hard to explain and is better described in the book) the name of who it wants. They go, get him, stab him through the chest, and the sword gives him his life back. Viktor is trying to ignore the sword because who the sword wants because of the gender of that person. After the 3rd person is killed, he tells his King who the sword wants, and the chapter ends. I got so frustrated at that point because I wanted to know WHO it was. But it compelled me to keep on reading.

In the next chapter, which takes place years later, it is revealed who the successor is. Her name is Rhada and she is the most feared and hated person in the realm of Kaena. It is explained that she is responsible for a massacre at a city called South Fort, which was done by the King’s command. She is summoned to the King and Queen after the Sorceress Myranda has a vision of a city. Her exact vision is this:

North, in the city of Tyos, the blood of the innocent people has flooded the streets and a great wall of flame has swallowed the Blood Sea entirely

King Firion and Queen Scarlet order Rhada to go to Tyos, investigate if it happened, and report back to them. She decides to take her Captain, Mayvard Stonewall, with her, which anger Myranda. They are supposed to be married within three days, and now the wedding is on hold. At this point in the book, I didn’t like Rhada. She came across as cold, mean, and unfeeling.

As Rhada and Mayvard are preparing for their journey towards Tyos, a group of rebels is meeting in the city of Mordrid to discuss A) when to kill Rhada and B) when to attack and kill the King. Unbeknownst to them, there is a spy for King Firion in their midst.

I won’t go much into the book after that point but to say that Rhada had a tough time of it for the rest of the book. I went from not liking her to feeling bad for her. I kept thinking to myself”Thank God for Mayvard“, especially at the end of the book.

There were a few smaller storylines that were wrapped up by the end of the book, but the main storylines were not. I was very disappointed when the book ended. There were a few things that I wanted to know and now I will have to wait for the next book to find out. I did find the epilogue fascinating.

How many stars will I give Shadows of Men? 4

Why? A great fantasy that kept my attention. The author did a great job writing vivid characters and a world that came alive. Also, and I never comment on this, the cover totally lived up to the book.

Why: Violence, sex, a pretty graphic chapter of torture and one rape scene.

One thought on “Shadows of Men (The Watchers: Book 1) by M. Lee Holmes”