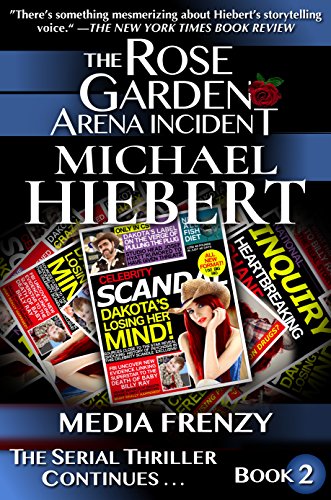 Stephanie Banner is twenty years old the night Dakota Shane stands center stage while six bullets ring out through the stadium. Five deaths occur from those shots, although only four ever go on record.

All four are women.

It happens in Portland, Oregon, at the Rose Garden Arena. The show is a sellout. Twenty-two thousand seats gone in less than four hours.

For the eight days leading up to the concert, a handful of disparate lives intertwine as their world unravels. Their sanity, their relationships, their work, their children, the law, and even death hangs in the balance. Among them are: the learning-disabled black kid from East St. Louis trying to move past having his little sister die in his arms when she and his Momma become collateral damage during a drive-by; the quick-witted black man who, after losing control of his car on his way to visit family in Portland, finds himself duct-taped to a chair, a hostage to a meth-addled lunatic wanted for a double homicide; the Latino son now desperately struggling to rise above his abusive father and help his mother and sister move on to a better life, while unable to let go of the tremendous guilt he bears over the fate of the other sister he once had; the slash-punk singer who manages to score her band the best gig of its career, only to learn she may not have a band left to play it; the Korean psychiatrist finally confronting how much of her life has slipped by her—how many years she lost—while focussing on far less important things; the ex-LAPD detective now working for the Portland PD finally facing the ghosts that still linger from the time of the Rodney King riots—a past that forced him to drag his family up out of LA; the bitter ex-wife of a disc jockey who still secretly listens to her ex-husband’s midnight radio show as she drinks herself into a whiskey coma; the out of control daughter having unprotected sex with strangers hoping that pregnancy might draw the attention of parents unable to see past themselves…

And then, Dakota Shane: chart-topping superstar with a dark secret, caught in a media and tabloid frenzy full of rumor, speculation, and lies. She’s off her meds and grappling to find any semblance of herself that might still exist inside an identity forged over the past five years by an extremely successful record company’s marketing department.

Each of these lives is a story and the stories collide with each other like silver balls bouncing off bumpers on a pinball machine.
But in the end, The Rose Garden Arena Incident is a tale about passion, about bravery, about redemption, about fixing those things in the world that are fixable and learning to live with the things that are not—A heartbreaking story of tragedy, despair, and loss that still somehow leaves you with a glimmer of faith, love, and hope.

The Rose Garden Arena Incident is a “serial thriller.” The story takes place over seven separate books, each encompassing a full day or more leading up to the Dakota Shane concert.

What a great 2nd book!! From the first chapter, I was drawn into the individual lives of the characters. Can’t wait for the next book to come out!!!

Picking up the next day from Mosh Pit, I was taken through a day in the lives of Marshall Davis, Aunt Fanny, Uncle Joe, Karma Ackerman, Stephanie, Brenda, Alexis, Reggie, and Dakota Shane.

I felt terrible for Marshall. He is suffering so much guilt over the deaths of his younger sister and mother. All that was told was that they died in a drive-by shooting. Why he is blaming himself, is still unknown to the readers right now. So a visit from Reggie, the man who saved Marshall afterward, is much-anticipated. To the point where his Uncle Joe got them courtside tickets to the Trailblazers.

Reggie is in a heap of trouble. He was drinking and driving, which resulted in him crashing his car in the desert. He gets himself out of the wreckage and walks to the nearest rest stop where he meets up with some people that he knew in Saint Louis.

Karma wakes up from her night out, hung over and questioning if she really should be out partying all night with Stephanie and Brenda. She accepts an invite from Stephanie to go to a club to see The Posey Dolls play. Her decision to stop drinking lasts until she gets into the car with Stephanie and Brenda, and they share a bottle of vodka. She learns something shocking about Brenda and then goes and does something foolish.

Alexis and her band are setting up to play at The Smilin’ Ghandi Cafe. The band is at odds with each other over everything. I wanted to smack Cindy. She was such a witch to Alexis about a recording they did a few weeks back and haven’t heard back from the agent. The other band members, Fiona and Namika, arrive and they continue to set it up. The tension between Alexis and Cindy come to a head with surprising results.

Dakota Shane’s tour bus rolls into the Hotel Casablanca in Salt Lake City, Utah. She is a mess, convinced that she has a stalker and the stalker killed her 14-month-old son, Billy Ray. Her road manager, Tommy, is under a lot of pressure from her agent, the Admiral, to keep her at least partly sane until her tour is over. Unfortunately, Tommy has to break the news to Dakota that could very well push her over the edge.

The book ends with all of these storylines up in the air plus all of the other ones from the first book.  But it ends in such a way, teasers from the next book, that I have to read the next one. I am hooked!!

How many stars will I give Media Frenzy: 5

Why: A great second book. You can’t help but care even more for the characters.

Will I recommend to other people: Yes