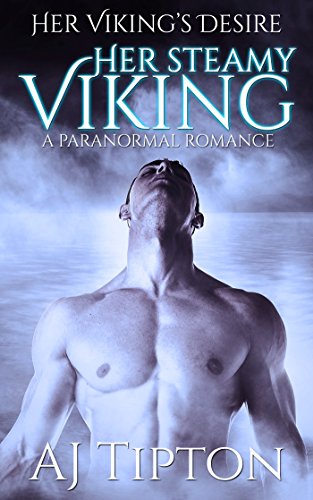 A cursed Viking trapped in a watery prison. A modern-day witch digging into her past. What they discover could bring them together…or tear them apart.

Over a thousand years ago, Bram and his brothers were cursed. The Viking has spent centuries trapped in a Scottish loch as an invisible water wraith, despairing of ever breaking free. But when a gorgeous woman splashes into his world, Bram finally has a chance to make things right.

Audrey is a tenacious witch exploring the grounds of her grandmother’s secret Scottish cabin. When she feels drawn to the beautiful waters of a nearby loch, she discovers she is not alone. Will her magic be enough to free her aqueous lover?

Her Steamy Viking is a hot paranormal romance novella. If you like smoldering love stories, magical adventures, and fun in the water, then you’ll love this standalone installment from the Her Viking’s Desire series.

I went into this book with the expectation of it falling a little short from the first story. I am happy to say that I was proven wrong.

This book was great. Short but great.

Audrey had inherited a cottage on a remote island from her grandmother. She came to the island expecting a rundown cottage and finds a castle. After poking around for a bit, she decides to take a rowboat out onto the loch. While she’s out there, she decides, “Hey, isn’t it a wonderful idea to sunbathe naked in the rowboat.” Not thinking of splinters or people coming upon her while she is naked in the rowboat. She thinks, “It’s remote, and no one will be here, so let’s do it.” If I decided to sunbathe naked in a rowboat, I would get a splinter in my butt and a plane would fly over and get an eyeful. So glad that didn’t happen in this book.

Bram is a Viking warrior who has been cursed to be water because the witch that cursed him accused him of being spineless. The curse went like this:

I curse you to truly be the spineless puddle you are. Not until you prove the strength of your conviction and two households work together for your release, will my curse be broken.

So he spent a thousand years at the bottom of the loch until Audrey rows on by and disrobes. He immediately becomes aroused at the sight of her. Not getting laid for a thousand years will do that to a guy. When Audrey drops her necklace into the lake and dives after it, does he get a chance to make his move.

And oh boy, did he ever. Not going to go into the rest of the book but there oral sex (on both ends) and one explosive sex scene. I had to fan myself during those scenes. They were so hot!!

How many stars will I give Her Steamy Viking? 4

Why: The sex was out of this world and I loved that Bram was a Viking with a conscience. Audrey was pretty awesome too. She had spunk…lol.

3 thoughts on “Her Steamy Viking (Her Viking’s Desire: Book 2) by A.J. Tipton”