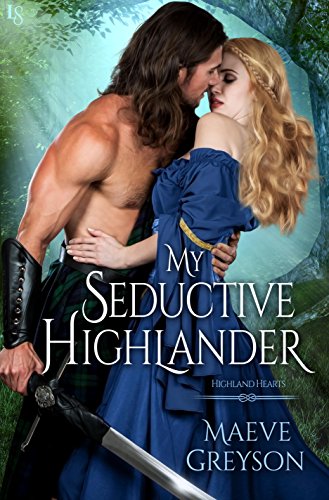 In this scintillating novel from the author of My Tempting Highlander (“Another exciting and heartwarming time-travel romance.”—Vonnie Davis), the ladies’ man of Loch Ness meets a hot-tempered lass who sets his heart aflame.

Though part of a legacy of time-traveling sisters, Lilia Sinclair is planted firmly in twenty-first-century Edinburgh. Her granny’s matchmaking with thirteenth-century Highlanders isn’t about to lure her into the past, especially as ancient Scotland enters troubled times. After all, Lilia is blessed—or cursed—with dire prophetic visions. To protect herself, she’s put up an icy emotional wall no man could cross—until a pair of gorgeous, rippling arms breaks right through.

Graham MacTavish is pure trouble. Once the dragon bound to Loch Ness, he’s transformed into a philanderer of the first order. In fact, because of his dalliances with other men’s wives, a rival clan wants his head on a pike. Before he provokes an all-out war, Graham is banished to the twenty-first century, where he must win Lilia’s hand—or return to die. But after meeting a lass as fierce as any Highland warrior, Graham knows one thing: life with Lilia, in any century, is a fate to embrace.

“Maeve Greyson surprises and enchants. The imaginative storytelling is hard to resist in this time-traveling tale of love, betrayal, and sacrifice.”—Victoria Roberts, bestselling author of My Highland Spy, on My Highland Lover

“What a roller coaster of emotions throughout! I love, love, love the Sinclair sisters and can’t wait to read more about the twins.”—Cassidy Cayman, author of the Lost Highlander series, on My Highland Bride

Includes a special message from the editor, as well as an excerpt from another Loveswept title.

From the first sentence, I knew I would like this book.  It goes:

“Dammint, man! Did ye no’ think to learn her name afore ye decided to bed her?”

Right from that sentence, I knew this was going to be a fun book and oh boy, was it. I got so involved in reading this book that I finished it in one night.

But on a serious note, I loved that the author chose to address depression. This had to of been the most realistic portrayal of depression that I have read to date. It was refreshing to read this. Most books that I have read that portrayed a person with depression described them as emo or loony. I loved that her support system could see when she was falling into a depressive state and be there for her.

Lilia is an empath, can read auras and has a prophetic vision, which contributed to her depression. And also the fact that she was almost screwed over by her business partner. So it’s not any surprise that Vivienne and Alberti are so protective of her. She is fragile.

It didn’t surprise me that they went into overdrive when Graham and Angus showed up.

Oh Graham, such a bad boy. He got caught having relations with a rival clan chieftain’s wife and mistress in a stable. According to him, he was making up for lost time. He spent 300 years as a dragon protecting Loch Ness due to an evil witch’s curse. He was, well for lack of a better term, screwing everyone that had a skirt because he got none as a dragon. His punishment was to be put into the 21st century, find Lilia, make her fall in love with him and bond. So he isn’t teleported back. He only has a month to do this, or he goes back and gets killed by the rival chieftain. Angus had to go along because, well, he was guilty by association and Granny Sinclair had a vision, and he was in it. Poor Angus.

When Angus and Graham hit the 21st century, it there was culture shock. From the toilets to riding in the cars to going in an elevator, it was hilarious.  I had tears streaming down my face during those scenes.

The end was what I expected, but the epilogue broke my heart. It was a great way to end the series, but still sad. I would love to know if there is going to be books with the kids? Because I enjoyed this book this much

How many stars will I give My Seductive Highlander? 4

Why? A fun filled romance that takes you on a wild ride between the 13th century and modern day.

Why: Sex, mild violence, and language

One thought on “My Seductive Highlander (Highland Hearts: Book 4) by Maeve Greyson”