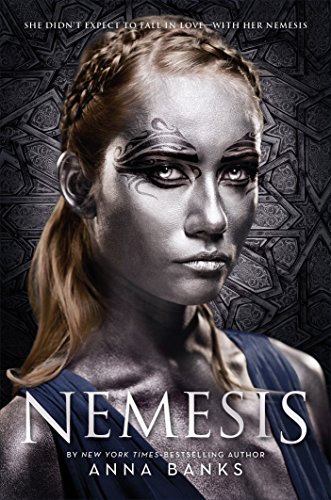 The princess didn’t expect to fall in love–with her nemesis.

Princess Sepora of Serubel is the last Forger in all the five kingdoms. The spectorium she creates provides energy for all, but now her father has found a way to weaponize it, and his intentions to incite war force her to flee from his grasp. She escapes across enemy lines into the kingdom of Theoria, but her plans to hide are thwarted when she is captured and placed in the young king’s servitude.

Tarik has just taken over rulership of Theoria, and must now face a new plague sweeping through his kingdom and killing his citizens. The last thing he needs is a troublesome servant vying for his attention. But mistress Sepora will not be ignored. When the two finally meet face-to-face, they form an unlikely bond that complicates life in ways neither of them could have imagined.

Sepora’s gift could save Tarik’s kingdom from the Quiet Plague. But should she trust her growing feelings for her nemesis, or should she hide her gifts at all costs?

A thrilling futuristic fantasy in which the fate of the world’s energy source is in the hands of a prince and princess who are rivals, by the New York Times-bestselling author of the Syrena Legacy.

This book has been in my TBR pile since I heard that it was going to be published. When I got an ARC from NetGalley, I was pumped. I couldn’t wait to sit down and read it. When I did, I was utterly absorbed in the story.

I loved Sepora. She was ballsy. Who would fake their death, trudge across a desert, take on slave traders, save a half-fish/half girl cannibal and then escape from the royal harem? She would. She also had to hide the fact that she is a Forger of spectorium, a rare metal that all the kingdoms need. Not an easy task since she produces it like sweat, but she has her ways.

I liked Tarik and felt bad for him. He had just lost his father to and incurable illness called the Quiet Plague that is running rampant through his people. At the age of 18, he is responsible for running the kingdom of Theoria. Which is a considerable task but he has a hidden ace up his sleeve. He is a Lingot. A Lingot is someone who can tell if someone is lying just by listening to them. An advantageous trait to have for a Pharaoh.

I was thrilled that the Theorians were modeled after the Egyptians. I have a strange fascination with Egyptian mythology and love when it is used in a book. I am still trying to figure out what Sepora’s people, the Serbulians, are modeled after. I want to say Vikings, but I am not too sure.

Sepora and Tarik’s romance was a slow burn. There was an attraction, but neither one of them did anything until the end of the book. It worked for me because they were able to work on other aspects of their relationship.

Sethos is my favorite secondary character, followed by Rashidi and Cy the Master Healer. Sethos was the epitome of a 15-year-old, and I loved it. From wanting into the pharaoh’s harem to just being the annoying younger brother, it was awesome. I liked Rashidi because he was older and gave Tarik some sound advice and Cy the Master Healer because he was a 13-year-old prodigy. He was willing to everything and anything to stop the Quiet Plague.

The ending of the book, I didn’t like. While I understand what happened had to happen, doesn’t mean that I like it. Nothing was resolved, and that meant everything in Book 1 would be carried over into Book 2.

I want to add that I LOVE the cover of the book!!!

How many stars will I give Nemesis? 4

Why? I loved the plot and the characters. The only thing I really didn’t like was the ending (see above)

Why: Very clean. No sex (just one kissing scene), no violence, no offensive language. Just some pretty descriptive scenes of the Quiet Plague

One thought on “Nemesis by Anna Banks”