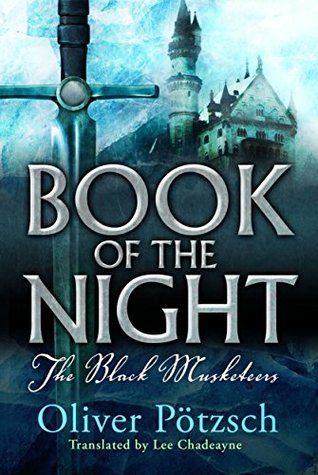 In this thrilling adventure by bestselling author Oliver Pötzsch, thirteen-year-old Lukas has been trained as a swordsman by his father, a nobleman who was once a famed Musketeer. When the threat of war and accusations of witchcraft spread across the land, Lukas’s life is forever changed. He flees his home and vows to find his missing sister.

Surviving as an outcast, Lukas encounters thieves and mercenaries, a strange astrologer, and a master swordsman. He also meets three other fencers—Giovanni, Paulus, and Jerome. Each brings a special talent to their team that leads them to the Black Musketeers, the best fighters in the army. But living with the black-armored Musketeers is nothing like they imagined. In his quest to find his sister, Lukas learns of a legendary book that holds powerful magic. As he fights to keep the Book of the Nightout of the hands of his greatest enemy, Lukas discovers the secrets of his own family and what it really means to be a Musketeer.

I rarely read historical fiction even though I like reading it. I don’t know why I don’t read that genre. Maybe because 90% of the historical fiction that I have read is dry. It becomes boring because the authors usually stick to the facts.

That is what I liked about this book. While it was accurate, the author built a fictional story around those events.

I felt awful for Lukas. His whole world was ruined within a day. His father murdered, his mother accused of being a witch, and his sister kidnapped. If that wasn’t enough to break someone,he happened into town when his mother was being burned at the stake. Talk about traumatizing, and my heart broke for him.

After almost freezing to death and a run in with a group of children who were not good to be around, he fell in with a traveling group of performers. There he met Giovanni, Paulus, and Jerome, fencers who put on an act. He proves his worth against the Master fencer and is incorporated into their act.

Not going to go into the book from there. All I have to say is that Lukas finds out a lot of things about his mother, sister, and father from a few people. Also his fencing skill is put to the test as well.

The end was a bit surprising to me because I wasn’t expecting it. I thought that the opposite was going to happen and was preparing myself for it. I also loved that the author did leave the book open for a second book.

How many stars will I give Book of the Night? 4

Why? A great, engrossing read. I was up most of the night and got emotionally invested in Lukas’s character.

One thought on “Book of the Night by Oliver Potzsch”