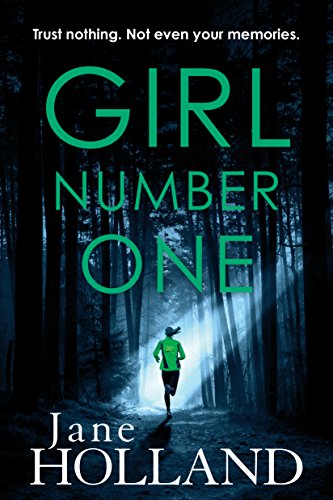 There’s a body in the woods. At least, there was. Eleanor Blackwood saw it on her morning run: a young woman, strangled to death.

But the police can find nothing—no body, no sign of a crime—and even Ellie has to wonder if it was a trick of her mind, a gruesome vision conjured up by grief. It’s eighteen years to the day since she witnessed her own mother’s murder on the same woodland spot. But what if she really did see what she thinks she saw? What if the body was left there for Ellie alone to find?

And there’s one detail Ellie can’t shake: a deliberate number three on the dead woman’s forehead. When she discovers a second body, this one bearing the number two, Ellie is convinced they are not messages but threats. The killer is on a countdown: but who is girl number one?

Eleanor was six years old when she saw her mother’s murder on a path in the woods by her farm. She was so traumatized that she couldn’t remember who the murderer was. Even though she looked him right in the face. She spent years in therapy trying to remember who the “shadow man” was.

Her childhood from that day on wasn’t that great. Her dad turned into an alcoholic mess. She struggled with the stigma of being the girl who couldn’t remember her mother’s murderer. She went to university with the plan to stay away. She ended up coming back and teaching physical education at one of the primary schools in the area.

Her life is going great, and she decides to take a run on the path in the woods where her mother was murdered. During her run, she sees that the main path is blocked off. The secondary path, the one her mother was killed on, is the only one available. Going down that path, she feels like someone or something is watching her. Then she stumbles upon a body of a naked woman with the number 3 on her forehead. Upset, she books it out of the woods and calls the police. Only to find the body has disappeared and people are looking at her like she has lost it. Even her father says as much before telling her to leave and never come back to see him again.

Not going to go into the rest of the book but it was great and kept me guessing who the killer was. I did think that I had him/her pegged at one point in the book. Boy, I was wrong.

I did feel bad for Ellie, but she was immature. Her temper seemed to get the best of her at times. Body slamming the student who was being rude to her and calling her a freak was a little much. I was shocked that she only got talked to and not fired.

The ending was fantastic. So much was revealed, though, that my head was spinning.

Why? While it was a great psychological thriller, I was a little taken aback by Ellie’s immaturity and the fact that she acted like she was 19 (she is 24 in the book). It took away from the book, in my eyes.

Will I reread? yes

One thought on “Girl Number One by Jane Holland”