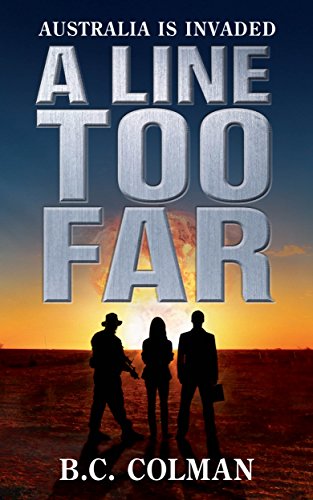 It’s a line too far and they’ve crossed it

Chinese commandos in a lightning raid have seized the vast, under-populated, resource-rich lands of Northern Australia. Thousands of Australian soldiers are held hostage. International realpolitik has left Australia abandoned by its supposed allies and its brittle social fabric is rapidly unwinding as the people panic.

A Chinese ultimatum demands the annexation of the country’s top half in ten days, or face a full scale invasion.

As other politicians clamour to sue for peace, Prime Minister, Gary Stone, in a desperate race against time and impossible military and political odds must commit to a risky and controversial plan to try and free the country …

I was undecided about this book when I was reading the email that featured it. I am not a huge fan of war/spy books but will read them. I read them because they makes me feel closer to my grandfather, who died in June of 2015. He was always reading, and he loved that genre. That is what  made me chose this book.

I was prepared not to like the book and trudge through it. I ended up liking it. The beginning was bumpy, but once it ironed out and the book picked up the pace, it was a delightful read. I read it one day.

I did read reviews where people were complaining that this scenario is unrealistic. Hello, it’s a fiction book. Fiction. Everyone is entitled to their opinions but jeez.

As I said above, I thought it was a good and quick read. I learned more about how the Australian government works than I ever wanted to know. I thought the author did a realistic job of showing how people will panic when an event like this happens.

I was impressed with PM Stone’s, well, stones, as did his wife and most of his Cabinet members.

The author also dealt with the aftermath of what happened realistically too. I liked the ending because of how true to life it is.

I do think that this book would have been one that my grandfather would have liked.

Why? An action filled fast paced book that was great to read.

One thought on “A Line Too Far by B.C. Colman”